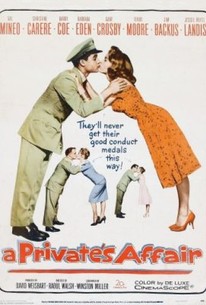 A trio of energetic young men try to put on a good show for their Army camp, in this lightweight comedy by Raoul Walsh. Luigi (Sal Mineo just risen to stardom), Jerry (Berry Coe), and Mike (Gary Crosby) are in boot camp when they are presented with a chance to represent their unit in competition on a national television show. The three guys are up to the challenge, which begins a chain of unusual circumstances that not only have them singing and dancing at the proper times, but also running into a trio of alluring young women (Barbara Eden, Terry Moore, and Christine Carere). Then there is that little mix-up when the Assistant Secretary of War mistakenly marries herself off to a doped-up Private Jerry, all for a good cause.

Critic Reviews for A Private's Affair

Funny comedy with strange relationships and many inventive touches of style from Raoul Walsh.

There are no featured reviews for A Private's Affair at this time.