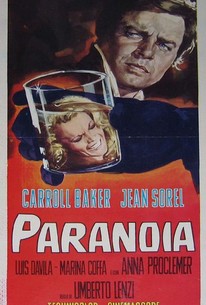 The second of two films starring Carroll Baker and directed by Umberto Lenzi, this one was released in Italy as Paranoia, the American title of its 1968 predecessor, Orgasmo. Baker plays Helen, a racecar driver who recovers from a coma and is summoned to the Majorcan villa of her ex-husband Maurice (Jean Sorel). Constance (Marina Coffa) is Maurice's new wife and wants Helen to help her kill him. Unfortunately for Constance, Helen double-crosses her and she is killed instead. But there are more surprises ahead when Constance's daughter Susan (Anna Proclemer) shows up and tries to kill Helen because she wants to help Maurice, who is revealed to be her lover. The story (co-written by cult filmmaker Rafael Romero Marchent) is all quite complicated, but has very little dramatic impact due to static cinematography and weak performances. Alberto Dalbes and Luis Davila co-star in this ludicrous thriller.

Critic Reviews for A Quiet Place to Kill (Paranoia)

There are no critic reviews yet for A Quiet Place to Kill (Paranoia). Keep checking Rotten Tomatoes for updates!

There are no featured reviews for A Quiet Place to Kill (Paranoia) at this time.