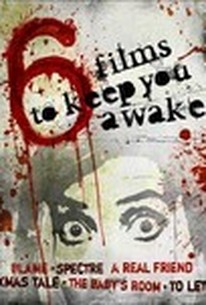 Originally produced as part of the Six Films to Keep You Awake horror series from Spain, The Ninth Gate screenwriter Enrique Urbizu's A Real Friend tells the tale of young girl still dealing with the death of her father when she's befriended by a charming vampire. Ever since her father died when she was just a young girl, ten year old Esrtella has lived alone with her mother Angela. Estrella is a child with an exceptional imagination, and in order to more easily digest the steady diet of horror and fantasy stories she thrives on, she befriends the monsters that would otherwise cause her endless nightmares. But Estrella's newest companion may be more than just a figment of her overactive imagination, and it won't be long now until she finds out the answer that age old question: "Do monsters really exist?" ~ Jason Buchanan, Rovi

Eduard Farelo
as The Vampire

There are no critic reviews yet for A Real Friend (Películas para no dormir: Adivina quién soy). Keep checking Rotten Tomatoes for updates!

This is an excellent movie from Spain, Very enjoyable, not really a true horror movie, but a good story about a young girl with a very large imagination. Neat to see leather face (Texas Chainsaw) in a different role, as her protector, A number of other monsters make fast appearances, Worth 4 stars

Not really a horror movie per se, but it has all the elements. It was very interesting to see Leatherface as the good guy in all of this. But this movie is more of a morality story with the message being, do you know what your kids are watching. You kind of get the idea of the preaching but it gets hammered home at the very end. Interesting story that has some originality to it.