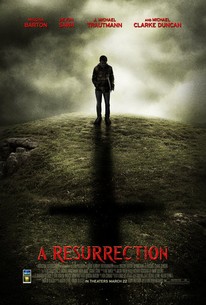 SYNOPSIS: A Resurrection is the story of a down to earth high school psychologist who tries to help amentally ill student who actually believes his brother is returning from the grave for revenge on the students who killed him. He's a tough egg to crack and as he slowly feeds her clues into his brother's mysterious death, she has her sheriff's deputy fiancé verify the less than believable and vague information. And before she can get his mind right, she unwittingly falls into his plot to keep her and the other students locked in the school until his brother can arrive at six along with the evil spirit that now inhabits him, keeping him alive until he can take his six souls and leave him whole again. (c) ARchstone

Critic Reviews for A Resurrection

Duncan is the best thing about A Resurrection, brightening up the picture with the ten minutes of screen time he has, showing more comfort and range than anyone else in this dreary, cheapy effort.

Audience Reviews for A Resurrection