A Ring of Endless Light2002 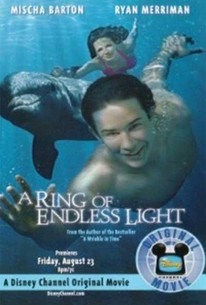 A Ring of Endless Light Photos

Vacationing on Seven Bay Island in the summer of her 16th year, budding poet Victoria "Vicky" Austin (Mischa Barton) is faced with the approaching death of her beloved grandfather (James Whitmore), who is suffering from leukemia. In hopes of briefly forgetting her troubles, Vicky begins assisting a handsome young researcher named Adam (Ryan Merriman) who is working with sea mammals. In this capacity, Vicky discovers that she possesses the unique gift of being able to communicate with dolphins -- and also finds herself romantically torn between Adam and a wealthy suitor named Zach (Jared Padalecki). Suspense enters the picture when the dolphins "tell" Vicky of an illegal driftnet fishing operation. Based on the 1981 novel by Madeleine L'Engle and location-filmed in Australia, A Ring of Endless Light made its cable-TV premiere over the Disney Channel on August 23, 2002.

Critic Reviews for A Ring of Endless Light

Director Greg Beeman does as much as is required with the simplified script, which has totally eliminated the contemplative and edgier facets of the book.

Madeline L'Engle fans will notice changes in the TV adaptation of her novel... a strong dash of the tale's poignant spirit survives, thanks to Mischa Barton's luminous presence as Vicky and the venerable James Whitmore as her tender and wise grandfather.

Audience Reviews for A Ring of Endless Light

There are no featured audience reviews yet. Click the link below to see what others say about A Ring of Endless Light!

A Ring of Endless Light Quotes