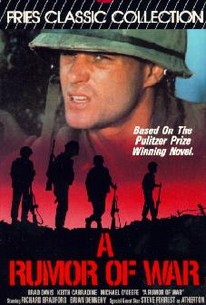 The 2-part TV movie Rumor of War was based on the 1977 memoirs of Vietnam veteran Philip Caputo. Brad Davis stars as Caputo, who during the mid-1960s was a Marine lieutenant. In battle after battle, Caputo performs his duties admirably, even when questioning the wisdom of America's Vietnam involvement. As both the war and the body count escalate, Caputo suffers a nervous breakdown. A Rumor of War bears an inevitable resemblance to the much-earlier antiwar epic All Quiet on the Western Front, right down to the presence of a father-figure combat sergeant (Brian Dennehy). Its few cliches aside, the film is a powerful indictment of the brutalization and depersonalization of America's Vietnam forces. A Rumor of War premiered on September 24 and 25, 1980.

Perry Lang
as Woodward
View All

Critic Reviews for A Rumor of War

There are no critic reviews yet for A Rumor of War. Keep checking Rotten Tomatoes for updates!

Audience Reviews for A Rumor of War

There are no featured audience reviews yet. Click the link below to see what others say about A Rumor of War!

A Rumor of War Quotes