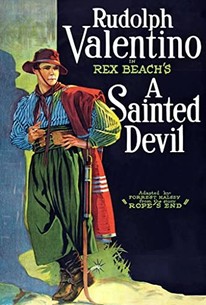 There's something very calculated about this Rudolph Valentino vehicle. As he did in Four Horsemen of the Apocalypse, the star plays an Argentine with a talent for the tango. The production and costuming are elaborate, and the story was based on the Rex Beach novel Rope's End. But none of this can help a weak plot line which is stretched mighty thin to last for nine reels. It is arranged for Don Alonzo de Castro to marry Julietta (Helen D'Algy), who comes from a noble Spanish family. Castro's jealous ex-girlfriend, Carlotta (Nita Naldi), schemes with bandit El Tigre (George Siegmann) to destroy their happiness. On the couple's wedding night, El Tigre stages a raid and kidnaps Julietta. Carlos goes after him, but is enraged when he sees a woman with a bridal veil embracing the bandit. He believes it is Julietta, when it's actually Carlotta. Castro plans revenge on El Tigre. Meanwhile, Julietta escapes to a nunnery with the help of Carmelita, a dancing girl (Louise Lagrange). Although Carmelita loves Castro herself, she eventually reveals Julietta's hiding place and the couple are reunited.

A. de Rosa
as Jefe Politico

Louise Lagrange
as Carmelita
View All

Critic Reviews for A Sainted Devil

Valentino is, however, a far better actor in this film than in Monsieur Beaucaire. The atmosphere evidently suits him.

The picture is not notably produced although it is evident a flock of money has been spent.

[Valentino's] playing of the part is excellent, in that it shows how polish and grate can be made compatible with the utmost force and fire. He takes It Ina perfectly even creBcondo.

[A Sainted Devil] is full of thrilling sensations and intrigue, supplemented by gorgeous staging and wonderful dancing.

A Sainted Devil is more Valentino than story, more picture than sequence, but, considering that the popular interest is all in Valentino and not at all in his stories, discussion of the successes and failures of this tale by Rex Beach are idle.

Brings out, as in the worst days of break and tear films, brides dressed as manólas and an "Argentine" gentleman who marries dressed in a short jacket with "operetta applications". [Full review in Spanish]

Concerning Valentino, It may be said that In A Sainted Devil he seems to possess hardly a nodding acquaintance with nil that Is going on about him.

The character portrayed by Valentino suits him to perfection... This picture has been superbly produced and the Spanish atmosphere is excellent.

There is plenty of pictorial appeal in the way of bizarre settings, pretty and quaint spots typical of a foreign land, excellent photography and, of course, Valentino and Nita Naldi.

The story gets involved in inessentials and misses anything like a big sensation.

It was thought Rodolph Valentino had about reached the heights in screen entertainment when lie gave the world Monsieur Beaucaire, but the screen's perfect lover has fairly outdone himself in A Sainted Devil.

Rudolph Valentino was vitally alive in The Sainted Devil.

There are no featured reviews for A Sainted Devil at this time.