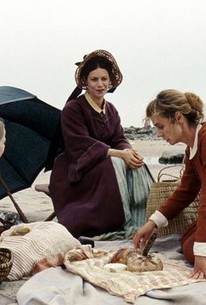 Two women are caught in a rivalry over the love of a child in this period drama, loosely adapted from a short story by Gustave Flaubert. Felicite (Sandrine Bonnaire) is a passionate woman eager to find love, and when her ardor scares off her boyfriend Theodore (Pascal Elbe), she takes a job as a domestic, working for wealthy Madame Aubain (Marina Fois). Aubain is a frail and troubled woman raising two children, Paul (Antoine Olivera) and Clemence (Melissa Dima); Felicite develops a close bond with the children, who in turn show her the sort of unconditional affection she's always longed for. Aubain, however, becomes deeply jealous of Felicite's warm relationship with the youngsters, and insists on criticizing her in their presence. Aubain, who is romantically involved with the children's music teacher (Thibault Vincon), finally decides to cut off the friendship between Felicite and teenaged Clemence (Marthe Guerin) by sending her daughter away to a private boarding school. Clemence's absence is a heavy blow to Felicite, and while she tries to fill the hole in her life by looking after her nephew, she never fully recovers from the loss. Un Coeur Simple (aka A Simple Heart) was the first feature film from director Marion Lane, who previously distinguished herself as an actress.

There are no critic reviews yet for A Simple Heart (Un coeur simple). Keep checking Rotten Tomatoes for updates!

There are no featured reviews for A Simple Heart (Un coeur simple) at this time.