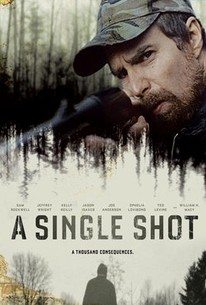 Critics Consensus: It has a bleak sense of atmosphere and a terrific performance by Sam Rockwell, but A Single Shot is undercut by its predictable story and slow pace.

Critics Consensus: It has a bleak sense of atmosphere and a terrific performance by Sam Rockwell, but A Single Shot is undercut by its predictable story and slow pace.

Critic Consensus: It has a bleak sense of atmosphere and a terrific performance by Sam Rockwell, but A Single Shot is undercut by its predictable story and slow pace.

David M. Rosenthal's backwoods thriller starts with a bang: a single shot, aimed at a lone deer, that hits and kills a young woman. The hunter, John Moon (Sam Rockwell, SEVEN PSYCHOPATHS), watches her die before discovering a box of money near her body. In a desperate panic, he takes the cash - hiring a low-rent lawyer (William H. Macy, FARGO) to fight his wife's (Kelly Reilly, FLIGHT) divorce suit - and attempts to cover up the killing. But when he discovers that the money belonged to a group of hardened criminals, the hunter becomes the hunted in this tense cat-and-mouse struggle in the backwoods of West Virginia. (c) Tribeca

Alex Diakun
as Skinny
View All

Critic Reviews for A Single Shot

A Single Shot does not add up to anywhere near the sum of its parts, and as individually impressive as any of those parts might be (Rockwell), we are left with a film that, if not quite a Frankenstein's monster, is certainly patchworky.

An odd mix of beautifully bleak atmosphere and hammily mannered performances, "A Single Shot" is simultaneously understated and overpowering.

Both predictable and outlandish.

"A Single Shot" is a singular pleasure, and worth seeking out.

None of these characters, no matter how trashed-up for the down-market occasion, are believable.

Sam Rockwell is one of Hollywood's most underrated actors and he shows why that's the case again in A Single Shot, a rural, neo-noir thriller that slowly pulls the viewer under its veil of mystery.

Buried somewhere in A Single Shot are the makings of a great movie, but there is simply a lot that needs to be trimmed away.

If you're going to take a shot at A Single Shot, make it [Matthew F.] Jones' novel (which is excellent) or grab a bottle of some sippin' whiskey to get you through the film.

A Single Shot is a film I can absolutely recommend, especially for fans of Rockwell wanting to see him expand his obvious talent. I only wish he had a stronger film to showcase this.

A Single Shot is a tense and nerve-wracking thriller, effective without frills, anchored by Sam Rockwell's stellar performance.

Filmed with a dark palette, "A Single Shot" is a perfect little film noir...

A Single Shot proves to be a mood piece set within a highly volatile location where everyone has a price.

Audience Reviews for A Single Shot

One Chance, One Secret, One Mistake. Good FIlm! I love Sam Rockwell. He picks great projects and this no exception. This is not a fast paced feature but I story I really enjoyed. Maintained a great tension and foreboding throughout which I really enjoy in a film. This is a simple story with some great twists and turns. Starts out slow like a slow burn and then ramps up quickly. This story is believable and has no real holes in it. It's a story you can relate to in that it seems very plausible and believable. You feel the characters fear and tension with the situation he finds himself in. This is a slow paced thriller that is well filmed and the performances are excellent. The tragic death of a beautiful young girl starts a tense and atmospheric game of cat and mouse between hunter John Moon and the hardened backwater criminals out for his blood.

A Single Shot draws influences from No Country for Old Men, A Simple Plan, and Winter's Bone, but is vastly inferior to all three of those films. The cast, which includes Sam Rockwell, Kelly Reilly, Jason Isaacs, Jeffrey Wright, William H Macy, and Joe Anderson does their best to elevate the material. But alas, the stolen money plot is too predictable to be suspenseful, the character study of John Moon a little too cliche to be sympathetic, and the pacing too slow to be engaging. The film successfully manages to create a dark, eerie backwoods setting. Almost every shot screams atmosphere. This certainly helps to maintain a consistent mood. Yet where the film focuses on its mood, it loses focus in its narrative. There are several tangents that serve little to no purpose in the plot. 15 minutes could have easily been left in the editing room and the story would have been more effective and tightly composed. If you're a fan of Sam Rockwell or dark psychological thrillers, there might be some redeeming qualities here, but A Single Shot will not linger in your mind once its over.

While hunting one day, John Moon(Sam Rockwell) accidentally shoots a young woman instead of the deer he thought he was aiming at. Amongst her belongings, he finds a very large amount of cash. Some of which he uses to employ Daggard Pitt(William H, Macy), a lawyer, to at least try to put a halt on the divorce proceedings his wife Moira(Kelly Reilly) is attempting to put through, desperately wanting to reunite his family. Considering her poor choice of babysitters, he may have a point. Most people would never think of West Virginia, where this movie could be set, as any place they may want to move to, as most of the characters in "A Single Shot" suffer under the weight of economic hardships and a grey environment, with Moon not being able to hold down a job.(Even Kelly Reilly looks weatherbeaten.) But one thing that thrives there is character turns with quite a few here from a good cast that also includes Jason Isaacs, Jeffrey Wright and Ted Levine.(Levine to his credit is pretty much unintelligible.) What the movie lacks is any kind of perspective on its lead character. It is important to remember that whereas Moon may think he is invariably doing the right thing(except for the part about not dropping the dime anonymously on the woman he shot), the problem is the movie is consistently on his side whereas the truth is always a bit more complicated.

A Single Shot is very much a drama, with some thrilling elements. I have already mentioned Fargo, but A Simple Plan would be a good comparison as far as the overall mood of the film is concerned (more people should see A Simple Plan by the way). It is very dark, very deliberate in pace, but very well acted and plotted out in a convincing manner. There may not be much room for levity in a film like this, but between the atmosphere and the fine performances from the cast, I am definitely glad I did not miss this film. read the whole review at thecodeiszeek.com