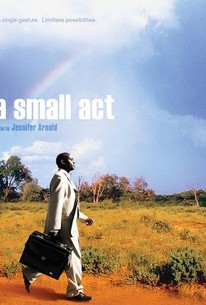 When Hilde Back sponsored a young, rural Kenyan student, she thought nothing of it. She certainly never expected to hear from him, but years later she does. Now a Harvard graduate and a Human Rights Lawyer for the United Nations, Chris Mburu decides to find the stranger that changed his life. Inspired by her generosity, he starts a scholarship program of his own and names it for his former benefactor. The top students in Mukubu primary school are in the exact same situation as Chris once was. They are bright, but can't afford to pay school fees. With the creation of Chris' fund, these students have new hope. But the program is small; how many will qualify for a scholarship? Using a strong narrative, the film interweaves seemingly separate lives into a cohesive whole. With clarity and grace, A SMALL ACT, bears witness to the ripple effect a single action can create. -- (C) Official Site

Critic Reviews for A Small Act

Jennifer Arnold's heartfelt and idealistic documentary celebrates the remarkable effect of a small - actually, not so small - act of altruism.

An understated doc that will inspire and move you.

The film couldn't be more heartening -- yes, individual actions do make a difference. But it's bittersweet as well.

A Small Act is about making a difference, no matter how small or insignificant and the ripple effect it can have.

Well made, powerfully moving and genuinely inspirational documentary that shows the astonishing ripple effect of an act of charity.

The budget may be small change and it comes with no stars, but here's a documentary with a whole heap of heart.

The message here is certainly inspirational, but the film is cinematically conservative and fails to pack much political punch.

This multi-layered documentary couldn't be more inspirational if it tried. As it shows the ripple effect of an act of charity, we begin to understand that anything we can do might actually help.

Rich Cline
Shadows on the Wall
View All Critic Reviews (17)

Audience Reviews for A Small Act

I'm a little late to the party on this one, but as I write this, I'm in tears after watching this extraordinary documentary. Full disclosure here...I know many of the people behind this one - -Writer/Director/Producer, Jen Arnold, D.P./Producer, Patti Lee, and Editor Carl Pfirman - - and couldn't be more proud. A smash at this year's Sundance festival, and subsequently aired on HBO, this film is simply beautiful. We see how an elderly Holocaust survivor, living on her own in Sweden, was able to make such a difference by sponsoring a child's education in Kenya...and how this one small act reverberates around their respective communities. At times so tense (especially during a sequence where children await the results via text of a potentially life-changing exam), my heart was pounding. I was especially impressed by the wonderful cinematography, editing, and humanity of the piece. Opening sequence images instantly conveyed the power that we all live under the same sky, breathe the same air, and are responsible for each other, regardless of man-made borders. I grew up in a family that sponsored a young boy in the Philippines, and years later, I had the privilege of meeting him there in person. As a child, I didn't believe he existed, cynically thinking the whole thing was a hoax. He was real, and grateful. I felt our family had made a difference. This wonderful documentary reignited those same feelings. Bravo to everyone involved.