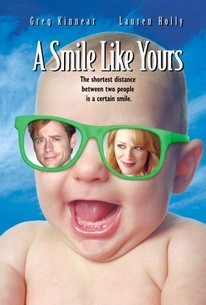 Critics Consensus: Flat and unfocused, A Smile Like Yours aims for romantic comedy but settles for tired sitcom formula.

Critics Consensus: Flat and unfocused, A Smile Like Yours aims for romantic comedy but settles for tired sitcom formula.

Critic Consensus: Flat and unfocused, A Smile Like Yours aims for romantic comedy but settles for tired sitcom formula.

This romantic comedy from the John Hughes school of domestic farce stars Greg Kinnear and Lauren Holly as Danny Robertson, an elevator installer, and his wife Jennifer, the owner of an aroma therapy products store. They have a great marriage until Jennifer, who desperately wants a child, secretly stops taking her birth control pills. When she fails to become pregnant, she covertly delivers a sample of Danny's sperm to a fertility clinic, which discovers a biological problem. Danny is furious and embarrassed, but he reluctantly joins the effort to conceive. The crusade to have a baby becomes a humiliating spectacle for both Robertsons, and, as their marriage begins to fracture from the stress, Danny contemplates the charms of a sexy architect (Jill Hennessy) while Jennifer eyes a charming business executive (Christopher McDonald). A Smile Like Yours was the directorial debut of Keith Samples, producer of Big Night (1996) and Two Days in the Valley (1996).

Barbara Larsen
as Woman in Window/Woman on Plane

Tony Amatullo
as Surrell Board Member

Tim Helfet
as Surrell Board Member

Jeff Matloff
as Surrell Board Member

Brad Rivers
as Surrell Board Member

Michael Jang
as Member of Family with Camera

Woody Jang
as Member of Family with Camera

Tali Jang
as Member of Family with Camera

Ellen Hoberman
as Mother and Daughter

Sarah Hoberman
as Mother and Daughter

Jim Cranna
as Guy on Plane

Joy Michiel
as Woman on Plane

It's the cinematic equivalent of having a saccharine-coated tongue depressor jammed down your throat.

Keith Sample's film aspires to the innocent charm of a newlywed comedy like Barefoot in the Park, but gets bogged down in witless sex jokes.

After a while, I could smell the jokes coming like Grandma's two-day-old stuffed cabbage.

This may not be the worst romantic comedy of the year, but surely it's the flattest. The thing has no energy. It just lies there, waiting to be kicked.

An uncommonly thoughtful and intelligent mainstream entertainment, painstaking and stylish in every aspect.

The adorable Kinnear is not doing himself any favors with overblown sit-coms like this.

A Smile Like Yours makes no one smile or cry, just wince. The script is unwieldy, and Kinnear and Holly stuggle in every frame to make characters likable.

On paper, infertility would seem a distasteful subject matter for light comedy. On screen, it only gets worse.

It's as compelling as a car commercial, as deep as a diaper pail.

The brief Lucy scene was funnier than anything else in the movie. If only the clip had lasted longer.

The direction is unfocused and the end result is patchy.

Okay, not much substance really at all. It definitely was not a laugh-out-loud comedy, it was cute at times. I didn't feel connected to the characters or invested in the story.