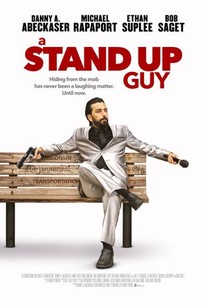 A Stand Up Guy Videos

A Stand Up Guy Photos

Sammy Lagucci is a lovable loser who just wants to do right by his daughter. When he finds out the gangsters he runs with are planning to take him out, he enters the Witness Protection program to protect himself and his family. Going from The Big Apple to a small town in Wisconsin gets him down at first, but on a dare he does an impromptu stand-up comedy routine and finds he has a knack for it. His act goes viral, and what should be a blessing turns into a curse when his newfound fame gets the attention of the mob.

Danny A. Abeckaser
as Sammy

Ethan A. Russell
as Earl

Justin L. Wilson
as The Skinhead

Tom Waters
as The Judge

Joseph Basile
as Wiseguy In Court

Stevie Guttman
as Bob
View All

Critic Reviews for A Stand Up Guy

The action picks up in the third act, but by then most young viewers-even the readers among them-may have already lost patience.

Audience Reviews for A Stand Up Guy

There are no featured audience reviews yet. Click the link below to see what others say about A Stand Up Guy!

A Stand Up Guy Quotes