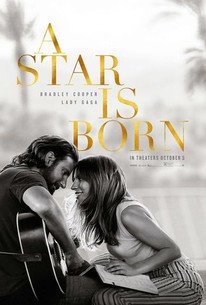 Critics Consensus: With appealing leads, deft direction, and an affecting love story, A Star Is Born is a remake done right -- and a reminder that some stories can be just as effective in the retelling.

Critics Consensus: With appealing leads, deft direction, and an affecting love story, A Star Is Born is a remake done right -- and a reminder that some stories can be just as effective in the retelling.

Critic Consensus: With appealing leads, deft direction, and an affecting love story, A Star Is Born is a remake done right -- and a reminder that some stories can be just as effective in the retelling.

A Star Is Born Videos

A Star Is Born Photos

In "A Star Is Born," Bradley Cooper and Lady Gaga fuse their considerable talents to depict the raw and passionate tale of Jack and Ally, two artistic souls coming together, on stage and in life. Theirs is a complex journey through the beauty and the heartbreak of a relationship struggling to survive. In this new take on the iconic love story, four-time Oscar nominee Cooper ("American Sniper," "American Hustle," "Silver Linings Playbook"), makes his directorial debut, and also stars alongside multiple award-winning, Oscar-nominated music superstar Gaga in her first leading role in a major motion picture. Cooper portrays seasoned musician Jackson Maine, who discovers and falls in love with struggling artist Ally. She has given up on her dream to become a successful singer, until she meets Jack, who immediately sees her natural talent.

Alec Baldwin
as Himself

Brandi Carlile
as Herself

Marlon Williams
as Self (Performing)
View All

News & Interviews for A Star Is Born

View All A Star Is Born News

Critic Reviews for A Star Is Born

Pop singer Lady Gaga is quite good as the wife... she subtly and convincingly manages the character's transformation from vulnerable ingenue to self-confident celebrity.

Even in its fourth rendition, A Star is Born hits the right emotional highs.

What really works about this version is the fact that Bradley Cooper co-wrote it, he produced it and stars in it, and put it together but he incorporates little elements of Lady Gaga's Story.

A Star Is Born is a fantastic film (...) [b]ut it's contempt for pop music is disappointing.

In the end, A Star is Born becomes a touching film hampered by its own legacy.

In its new incarnation, A Star Is Born presents a beautifully told and hugely affecting love story.

I am incredibly impressed with [Bradley Cooper's] directing skills.

A thoughtful remake with odes to each rendition that preceded it...

Filled with great performances and great music that will be talked about a lot come award season.

The apex of their collaboration occurs in the breathtaking first performance of "Shallow," during which Cooper wisely decides to stay on the edges of the frame, giving the literal and metaphorical spotlight to Gaga...

Could have been product, a glitzy film with a heartthrob and a pop star in the leads but instead resonates with real feelings and heartfelt emotion.

This A Star Is Born, unlike the more successful of its predecessors, never becomes a commentary on the destructive nature of stardom and success and the cruel, unforgiving character of the film or entertainment business.

Audience Reviews for A Star Is Born

Each A Star Is Born is a product of its time, and this one is no different: made in a digital era of viral videos and pop stars that can be born overnight, this is an infinitely more realistic and sincere version (both in plot and structure) compared to all others before.

This film aims to separate itself from other love stories using its music and the chemistry of its leads, both of which are good. Cooper shows off his acting chops and surprisingly decent singing voice, while Gaga shows off her singing voice and surprisingly decent acting chops. The story is poorly paced, and the jabs at pop music aren't so subtle, but overall it works pretty well. It's a good love story that also serves as a lesson on addiction, not only to drugs and alcohol but to the approval of others.

An inspired and touching revitalization of an American tragedy. Bradley Cooper fleshes out a troubled but sympathetic character in a downward spiral who meets an immensely talented but insecure lady gaga. Their chemistry is believable, as well as their musical chops, with some of the best songs written and performed for a contemporary film. Some minor pacing issues spoil an otherwise cohesive retelling that shines for the honesty of its performers.

While I'm not particularly a fan of remakes, unless the original film was terrible to begin with, A Star is Born has been a film that's been remade numerous times since the original version from 1937. Upon hearing the announcement that this 2018 version would be coming along, I decided to revisit the previous three renditions of this tale, with the original 30s version being the standout version in my personal opinion. With that said, I was highly looking forward to this movie in particular, due to the fact that the cast behind this film has already proven themselves to be talented in the past and Bradley Cooper stepping in to write and direct only peaked my interest more. A Star is Born is one of the best films of 2018 and one of my favourite remakes of all time. Following Jackson Maine (Bradley Cooper) as he stumbles across a struggling artist in Ally (Lady Gaga), they form an unlikely bond that very quickly gives her fame and fortune, if not in the best ways. Jack is a very detailed character here, being a drunk, having family issues, and struggling with his fame, while Alley is pretty much the exact opposite of that. This made for some terrific drama and the third act of this film brought me to tears. Between Bradley Cooper and Lady Gaga, I think you'd be crazy to believe this movie isn't going to give them both many awards in the coming months, but I truly believe Sam Elliot may give the best performance in the film. The way he subtly displays emotion here was absolutely brilliant and I think he deserves the most recognition for that. His character is fresh and has never been seen in any of the previous versions of this story, which was a pleasant surprise. When people reflect back on this film, they may remember it for the performances or where the story progresses from start to finish, but the music plays a very large role here. Although this isn't a musical, the original songs throughout this film are characters themselves. Throughout the film, you'll hear heavy Rock, Country, and even Hip-Hop, which caught me by surprise, but each song helps to deepen the characterization of either Ally or Jack and it was incredible to witness. Where I think some viewers may find issues, however, is in the fact that this film takes place over quite a long period of time. After the second act of this film concludes, it does speed up the pace and slightly jumps through time on multiple occasions, asking the audience to follow along without giving any definitive answer as to how much time has really passed, but I personally didn't find it necessary and the natural progression was felt by me, personally. The way this film is stitched together in editing was terrific in my opinion and only elevated the concert sequences, as well as the calm moments between characters. Sound and music drive this story and the editing around it all was very much present here and very well done. In the end, although the core story has remained the same through the years and the conclusion probably won't surprise those who have seen the previous versions of this story, there is enough of a fresh take here to please fans and newcomers. This 2018 version of A Star is Born takes the best elements from the past and injects new life that added many layers to these characters. Aside from a few jarring instances that come out of nowhere story-wise, I truly don't have many complaints. This movie worked for me on an entertainment level, as well as an emotional level and it's one of the best movies I've seen all year.

A Star Is Born Quotes