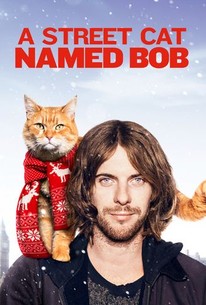 Critics Consensus: A Street Cat Named Bob uses a fact-based feelgood tale as the inspiration for an unapologetically heartwarming movie that should move all but the most cynical of viewers.

Critics Consensus: A Street Cat Named Bob uses a fact-based feelgood tale as the inspiration for an unapologetically heartwarming movie that should move all but the most cynical of viewers.

Critic Consensus: A Street Cat Named Bob uses a fact-based feelgood tale as the inspiration for an unapologetically heartwarming movie that should move all but the most cynical of viewers.

This film tells the moving and life-affirming true story of the unlikely friendship between a young homeless busker, James Bowen, and the stray ginger cat named Bob who changed his life.

Adam Riches
as Man with Car

John Henshaw
as Dobson
View All

Cats vs Dogs: Who Have The Best Movies?
On DVD This Week: Fifty Shades Darker, Orange Is the New Black, and More
Mystery Science Theater 3000 and More on Netflix This Week

Veteran director Roger Spottiswoode makes the most of this appealing yarn and has fun showing us a Bob's-eye view of the streets of London.

This dramatization... plays like a Hallmark Hall of Fame TV movie, touching lightly on serious social issues before turning into a Cinderella story.

There's a telly-ish feel to much of A Street Cat Named Bob, an attempt to sanitise life on the streets... But it's impossible to watch a film about a happy-ending story like James and Bob's without a warm glow.

Treadaway may be sympathetic and charming as the struggling musician, but this is Bob's show, all the way.

A rewardingly unassuming, tough and tender portrait of a drug-addicted London busker whose ill-fated life takes a surprising turn after a ginger tabby turns up in his kitchen.

What this movie offers, unlike many other films in cinemas at the moment, is the feel-good factor.

Nothing other than a 'woe is me' tale of a drug addict who happened to be offered a second chance - with a few cat puns thrown in.

Naomi Soanes
One Room With A View

A warm if formulaic film. Treadaway offers a measured and thoughtful performance opposite Bob in a role that was probably trickier than it looks. How do you act with a cat? Is it like green screen work where you give your all to an emotional vacuum?

A feel good movie that will surely touch the hearts of animal lovers everywhere.

The film is as incredible as the real-life journey that inspired it. Spottiswoode manages to balance the right amount of grit and saccharine.

Yes, the picture is too cute for its own good - who thought shooting some scenes from the cat's point of view was a good idea? - and the dialogue is not up to much, but its heart is in the right place and it doesn't shy away from tougher subject matter.

The real story of the homeless drug user who found purpose in life thanks to a stray cat befriending him is quite the feel good movie. It does not sugar cote the drug aspects of James' story, but overall the tone is rather light. Of course, Bob's the shows real star and it's pretty amazing that they got the actual cat to play himself. Especially cat owners will find a lot of themselves and their pets in this, even if they never were drug users or street musicians. Very sweet.

It is good to know that the real-life James and his cat Bob found a proper home and future for themselves. Based on their story, this film traces the events that led to them coming to public attention - James' drug addiction and life on the streets of a cold and miserable London, Bob's adoption of James, their friends and foes, James' struggle to get clean and to look after Bob, and some great strokes of luck. The film however struggles with an unlikely combination, Trainspotting meets Disneyland animal hero story. That's a big ask. James looks suitably dishevelled but is a romantic character. The two heroes have to overcome many bittersweet challenges, and James' love interest is a princess-like young woman. On the other hand, the drug and street scenes are gritty: not at all like the smoother trials of a Disney cartoon. The cat is not a virtual human - its performances are naturalistic, with not many special tricks, and the character is more about how an everyday animal helps people. Consider carefully whether to take children along, as this isn't just a cute animal show, the cat theme only goes so far, and you will have to explain the drug scenes. To manage such disparate elements, the film needed to be decisive - sharply focused, written, directed, edited and acted particularly in the main roles. Though the story is charming, the end product is a little bemusing and corny. The heroes' rescue and success are the exceptions that prove the harsh rule of life on the streets.

A very heartwarming movie which also isn't afraid to show the hidden side of being homeless or an addict too. It is also made better by a superb performance by Bob the cat.