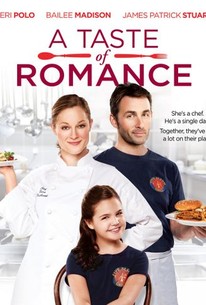 A Taste of Romance Photos

Uptight French chef Sara Westbrook (Teri Polo) gets fired up when her upscale café, Chez Varenne, is suddenly overshadowed by a new restaurant moving in next door run by a group of rowdy firemen. Led by handsome former fire fighter Gill Callahan (James Patrick Stuart) and his friend Danny (Rockmond Dunbar), The Five Alarm Grill is soon a big success while Sara and Patsy (Romy Rosemont), her pastry chef, struggle to bring in customers. Sara suddenly softens when she meets Gill's ten-year-old daughter Hannah (Bailee Madison) who she can't help but take under her wing when she learns Hannah is growing up without a mom. Ignoring the obvious tension between her dad and Sara, Hannah is soon playing matchmaker. As Gill and Sara slowly begin to stir up romance, their relationship is tested once again when a local food critic gets in the mix. Can the couple resist the temptation to compete with each other, or will the heat of competition drive them apart?

Critic Reviews for A Taste of Romance

There are no critic reviews yet for A Taste of Romance. Keep checking Rotten Tomatoes for updates!

Audience Reviews for A Taste of Romance

There are no featured audience reviews yet. Click the link below to see what others say about A Taste of Romance!

A Taste of Romance Quotes