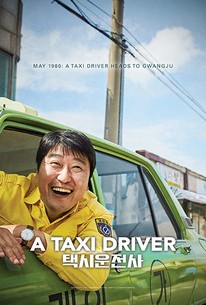 Critics Consensus: A Taxi Driver brings a ground-level perspective and a refreshingly light touch to a fact-based story with sobering implications.

Critics Consensus: A Taxi Driver brings a ground-level perspective and a refreshingly light touch to a fact-based story with sobering implications.

Critic Consensus: A Taxi Driver brings a ground-level perspective and a refreshingly light touch to a fact-based story with sobering implications.

In this powerful true story set in 1980, a down-on-his-luck taxi driver from Seoul is hired by a foreign journalist who wants to go to the town of Gwangju for the day. They arrive to find a city under siege by the military government, with the citizens, led by a determined group of college students, rising up to demand freedom. What began as an easy fare becomes a life-or-death struggle in the midst of the Gwangju Uprising, a critical event in modern South Korea.

Critic Reviews for A Taxi Driver

An entertaining journey into a tragic and violent chapter of Korean modern history.

A richly imagined tribute to a working-class hero.

Song's performance makes me wish the rest of A Taxi Driver was as thoughtful.

While a bit ponderous and overlong, it is a heartfelt appreciation of ordinary people turned heroes in extraordinary circumstances.

Despite overlong and emotionally elaborate, Hun Jang's drama film has its moments and ensures amusement.

Violently captivating and emotionally effective, A Taxi Driver showcases the talented Song Kang-ho with one of the most invigorating and captivating performances of 2017.

"A Taxi Driver" is a truly great film that manages to combine entertainment and meaningfulness, in a visually impressive package, under the elaborate direction of Jang Hoon and a great performance by Song Kang-ho.

A Taxi Driver delivers a powerful and heartbreaking, yet inspirational, true story framed within a Summer blockbuster.

A perfect mixture of action and reflection. [Full Review in Spanish]

Audience Reviews for A Taxi Driver

There are no featured audience reviews yet. Click the link below to see what others say about A Taxi Driver!