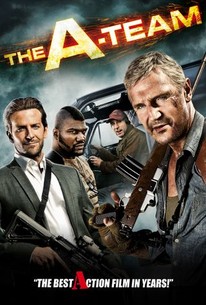 Critics Consensus: The A-Team assembles a top-rate cast only to ditch the show's appealingly silly premise for explosive yet muddled blockbuster filmmaking.

Critics Consensus: The A-Team assembles a top-rate cast only to ditch the show's appealingly silly premise for explosive yet muddled blockbuster filmmaking.

Critic Consensus: The A-Team assembles a top-rate cast only to ditch the show's appealingly silly premise for explosive yet muddled blockbuster filmmaking.

Director Joe Carnahan resurrects the popular 1980s-era action series with this explosive reboot following the adventures of four Iraq War veterans who begin a second career as mercenaries for hire. Col. John "Hannibal" Smith (Liam Neeson), Templeton "Face" Peck (Bradley Cooper), B.A. Baracus (Quinton "Rampage" Jackson), and H.M. "Howlin' Mad" Murdock (Sharlto Copley) are a group of former Special Forces operatives who have been fighting the good fight for eight years when they're sentenced to military prison for a crime they didn't commit. Breaking out with relative ease, they embark on a treacherous quest to clear their names while being hunted across the globe by Charissa Sosa (Jessica Biel), a high-ranking military officer and one of Face's many former lovers. Meanwhile, mysterious CIA operative Lynch (Patrick Wilson) offers tips that help point the federal fugitives in the right direction, which seems to lead straight to former military contractor Pike (Brian Bloom), who may have been responsible for setting them up in the first place. Just when it seems that the A-Team has all the evidence needed to prove their innocence, however, they discover that their latest mission is just getting started. ~ Jason Buchanan, Rovi

Bo Anzo
as Mike 'The Operator'

Corey Burton
as Narrator
View All

Critic Reviews for The A-Team

The A-Team certainly explodes onto the big screen in a major way.

Joe Carnahan's movie is loud and vulgar and disorienting, but also an exhilarating kind of fun.

"Overkill is underrated," says team-leader Hannibal Smith (Liam Neeson), ominously, and the next two hours proceed to give overkill its due.

Fond memories of Saturday teatimes spent with Hannibal Smith and the rest of The A-Team? Prepare to have them squelched.

The A-Team's cocktail of convoluted scheming, smirking one-liners, and unabashed mayhem is unsurprisingly well-suited to its demands. But it's still junk. Surely we've moved on?

This film is no great work of art, it's true - but it"s a perfect version of what it's meant to be.

At least nothing is taken too seriously as the delirious characters, action, and humor provide the essentials for a crowd-pleasing summer blockbuster.

What matters in The A-Team is just how many explosions Carnahan can fit inside the film's 121-minute run time.

If you are not punching the air at the sight of the A-Teamers operating an artillery tank while it plummets from a launch point just outside the planet's atmosphere, you are just too hard to please.

...nothing about The A-Team will really stick with you after watching.

Audience Reviews for The A-Team

Suspension of disbelief is nearly impossible when such a stupid movie insults our intelligence from beginning to end, believing to be much smarter than it is (when in fact it is just brainless) and relying on a lazy plot that couldn't be more obvious and doesn't even make sense.

I have to say I expected the worst from this but was pleasantly surprised and pleased by the time the credits rolled. I saw most of the TV series as a young boy and this film does keep a lot true to the original TV series. Just given a modern update and treated like a modern day action film with big stunts and over the top action plans only the A Team could do. At times it felt like a mix of the Bourne Trilogy crossed with Ocean's 11 elaborate missions! There is plenty of humour and it doesn't take itself seriously, pity the critics who just didn't get it, fool's!! A pure popcorn action blast everyone in the right frame of mind should enjoy.

I have never watched a single episode of the A-team, but a movie should be enjoyable regardless of whether a person has watched the show or not. This is one of those films where I enjoyed it overall, but it is a bad movie. The plot feels like three movies in one. The film is a trilogy of origin stories. The action is noisy and over-the-top, but that is the point. The biggest enjoyment factor in this film is seeing the main cast interact with each other. Their are some moments of fun, but as a whole, it is a disjointed mess.

This was a lot of fun. The actors they chose to do the different parts were actually very well casted. The ridiculous over the top fun that was the A-Team was successfully transplanted to the big screen.