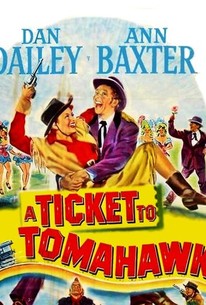 A Ticket to Tomahawk has sometimes been described as a musical western satire, but in fact is more "straight" western than anything else--not that there's anything wrong with that, of course. Dan Dailey plays a travelling medicine show entrepreneur who comes to the aid of fast-shootin' Anne Baxter, daughter of a railroad man. Stagecoach line representative Rory Calhoun is doing everything he can to prevent a new train service from winning a Colorado territory franchise. The whole affair boils down to a race between the train and Calhoun's coaches. The film's never-take-a-breath action scenes are played out against some of the most gorgeous Colorado scenery ever captured on Technicolor. A Ticket to Tomahawk has achieved latter-day fame due to the unbilled presence of Marilyn Monroe as one of Dan Dailey's chorus gals.

Will Wright
as Dodge

Bill Self
as Telegrapher

William Self
as Telegrapher

Olin Howland
as Conductor
View All

Critic Reviews for A Ticket to Tomahawk

There are no critic reviews yet for A Ticket to Tomahawk. Keep checking Rotten Tomatoes for updates!

Audience Reviews for A Ticket to Tomahawk

Colorful western comedy/adventure is no classic but has enough pleasures to make it worth sitting through. Aside from Marilyn Monroe in one of her last unbilled bits this has a charming Dan Dailey, a feisty Anne Baxter and some beautiful scenery.

A Ticket to Tomahawk Quotes