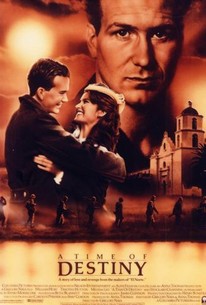 A Time of Destiny Photos

Martin (William Hurt) and Jack (Timothy Hutton) are World War II soldiers who go from being army buddies to bitter enemies during the war in this uneven melodrama. Not realizing they are brothers-in-law, Martin eventually learns that Jack is married to his sister Josie (Melissa Leo). On their wedding night, Josie's father Jorge (Francisco Rabal) had abducted her in an attempt to dominate her with his old-world ideals of marriage. When Jorge drowns in a lake after the car skids off the road, black-sheep Martin returns home to learn of his father's death, vowing to avenge his father after he learns his buddy is his sworn enemy.

Charmaine Glennon
as Sister at Desk

Harriet Robinson
as Sister in Hall

Erik Holland
as Colonel in US

Henry Bumstead
as Colonel in Italy

John Hawker
as Porter on Train

George Reel
as Man at the Train

Ralph Gallucci
as Priest at Funeral

Critic Reviews for A Time of Destiny

A Time of Destiny is a film of strong, pure emotions, of which the most powerful are love, hate and jealousy.

After El Norte, this is a step down for Gregory Nava: A misguided, miscast family melodrama about honor, friendship and revenge; in the leads, two good actors, William Hurt and Timothy Hutton, give disappointing performances.

There are no featured reviews for A Time of Destiny at this time.

A Time of Destiny Quotes