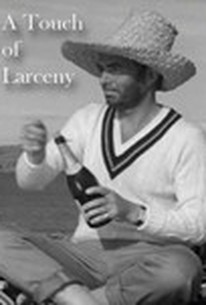 A Touch of Larceny Photos

In this British comedy, a formerly rakish submarine captain is transferred to a desk job. His reputation as a hero and playboy precedes him. He meets an old comrade and his gorgeous fiancee, a Yankee widow. His buddy is quite wealthy and the retired captain realizes that he too must make plenty of dough to steal the woman away. He immediately engineers an elaborate quick money scheme. First he makes it seem as if he has become a traitor in order to get the newspapers to write bad things about him. He then plans to sue them all for libel. He leaves his phony trail and then maroons himself on a desert island. He is later rescued and interrogated by the Special Branch. Fortunately, he convinces them of his innocence and continues with his plan. He then goes to the woman's home and is there discovered by his buddy. The friend sees that the two really are in love and gallantly bows out. ~ Sandra Brennan, Rovi

Martin Stephens
as Her Son

Waveney Lee
as Her Daughter

Critic Reviews for A Touch of Larceny

An ingenious British comedy, sluggish in tempo but amusing nonetheless.

As directed by Guy Hamilton, it is just reasonably good entertainment -- sporadically funny, but lacking in consistent style.

There are no featured reviews for A Touch of Larceny at this time.

A Touch of Larceny Quotes