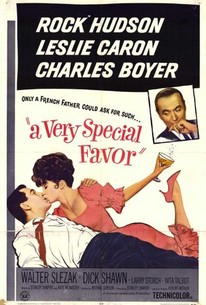 A Very Special Favor stars Rock Hudson as a notorious romeo and Leslie Caron as a prudish psychiatrist. At the urging of Caron's lawyer father Charles Boyer, Hudson begins a seduction campaign. Caron resents this intrusion in her private affairs and builds up a wall of resistance against the ardent Mr. Hudson. Still, the film ends with Hudson and Caron happily married, with plenty of children underfoot and another one on the way. Roundly panned for its alleged smarminess in 1965, A Very Special Favor is offensive today not for its sex talk but for its "pregnant, barefoot, in-the-kitchen" mentality.

Frank Kreig
as Man with Cigar

Barry O'Hara
as Man at Airport

The basic plot is nasty enough, but the dialogue is even nastier. As usual, all this escapes censorship under false pretences, not the least of which is that A Very Special Favor is funny.

There are no featured reviews for A Very Special Favor at this time.