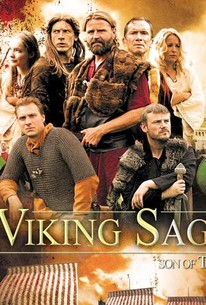 Barely escaping to the east as marauders slaughter his family and lay waste to his village, a ten year old Scandinavian boy named Helgi seeks shelter with his uncle Rurik and bodes his time until the day he will seek vengeance. Years later, during a treacherous sailing adventure, a grown-up Helgi (Ken Vedsegaard) discovers that the newly reigning king is the very man responsible for the carnage that left him an orphan, and prepares to strike back in a battle that will alter the course of history. Based on a true story.

Critic Reviews for A Viking Saga: Son of Thor

There are no critic reviews yet for A Viking Saga: Son of Thor. Keep checking Rotten Tomatoes for updates!

There are no featured reviews for A Viking Saga: Son of Thor at this time.