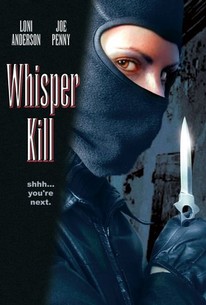 In this made-for-TV thriller, Liz Barlett (Loni Anderson) is a rookie journalist covering a series of murders that seem to have touched nearly everyone she knows. When one of Liz's best friends, a fellow journalist named Jerry Caper, becomes the next victim, she meets Dan Walker (Joe Penny), a freelance investigative journalist who knew Caper and wants to track down his killer. Liz and Dan join in hopes of finding the murderer before he can strike again. Before long, they become emotionally involved, though Dan discovers that Liz has a past that she isn't entirely proud of. Whisper Kill also stars Jeremy Slate, June Lockhart, and James Sutorius.

Critic Reviews for A Whisper Kill

There are no critic reviews yet for A Whisper Kill. Keep checking Rotten Tomatoes for updates!

There are no featured reviews for A Whisper Kill at this time.