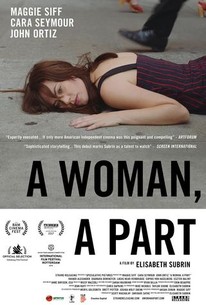 A Woman, A Part Videos

A Woman, A Part Photos

An exhausted, workaholic actress, Anna Baskin, 44, abruptly extricates herself from a successful but mind-numbing TV role, returning to her past life in New York to reinvent herself. But despite the desire for transformation, she cannot find herself outside of her career. When an upsetting personal betrayal unexpectedly leads to the role of her life, she must confront the reality of her past relationships in order to clear a path forward. The intimate story of Anna and her friends Isaac and Kate become magnified by the film's surrounding themes: gentrification, addiction, autoimmune disease, burnout, sexism in the film industry and 21st century marketing of the self.

Helen Coxe
as Realtor
View All

News & Interviews for A Woman, A Part

View All A Woman, A Part News

Critic Reviews for A Woman, A Part

"A Woman, a Part" knows how to hold an audience, and it's got a fresh, if commercially limited, subject: What happens when hipsters get old.

Siff gives a modest but poignant performance that rings true for women of a certain age and career.

A Woman, a Part mixes passion and ambivalence to create a work with ambiguities that seem earned, and lived in.

Touching on issues of artistic survival and the porous boundary between work and pleasure, Ms. Subrin, an accomplished visual artist and filmmaker, sifts addiction, celebrity and the plight of the aging actress into something rarefied yet real.

The feature debut from award-winning short film director Elisabeth Subrin is a rewarding, if occasionally solipsistic, study of a complex, mature woman at a crossroads in her life.

As far as directorial debuts go, A Woman, a Part is middling. We've all seen this story about an actress' life on the skids before. I'm sure Subrin has a great film in her; she's just not there yet.

The way Subrin's mosaic-like structuring comes together is quite rewarding, carefully calibrated in its haunting musical choices and nuanced performances.

Credit director Subrin for being resourceful in incorporating her cast's real-life situations into her storytelling.

It's the dynamics between these characters and their feelings of discontent that elevates "A Woman, a Part" from an intelligent character study to a film that unveils emotional introspection at every given turn, making for something evocative and timely.

The distinctiveness of A Woman, a Part emerges instead from the way it situates Anna's crisis within the complexity of decades-long friendships.

A Woman, A Part is excellent storytelling from start to finish and I can't wait to see what story Subrin tells next.

Audience Reviews for A Woman, A Part

There are no featured audience reviews yet. Click the link below to see what others say about A Woman, A Part!

A Woman, A Part Quotes