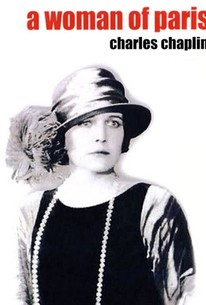 A Woman of Paris: A Drama of Fate Photos

French girl Marie abandons her artist fiancÉ Jean after a mix-up at the railway station. She leaves for Paris, where she's snapped up by wealthy Pierre. But what will happen when Jean bumps into her a year later? Chaplin's first picture for United Artists, and his first non-comedy.

Malvina Polo
as Paulette
View All

Critic Reviews for A Woman of Paris: A Drama of Fate

It is not pretty. Chaplin never meant it to be. But it is horribly true.

Chaplin's manner is deft and witty, but the depiction of unchecked wealth and the moral rot it breeds links this drawing-room romance to the fierce political comedies in which he stars.

For some years great groups of the illuminati have been proclaiming Charles S. Chaplin an artist. Yet our good old uncles and funny old aunts, who really knew about custard pies, demurred.

A Woman of Paris is a serious, sincere effort, with a bang story subtlety of idea-expression.

A moving and entertaining work, executed with high finesse by a master cineast.

Despite its wealth of detail and sharp observations about morality, the film remains curiously insubstantial with its refined dabbling in the elements of satire, sentiment and melodrama exploited with such panache in Chaplin's starring comedies.

Like most of Chaplin's films, the ending is simply superb, revealing a sense of the titular fate taking a turn for welcome satisfaction.

The picture's effectiveness is enhanced by several comic touches.

Chaplin's "drama of fate" is really a drama of coincidence and irony, as befits the crossroads of Victorian and Jazz Age Europe

The soap opera love triangle story takes the form of a morality play and is well-constructed but hardly substantial.

Its vintage melodrama does creak with age nowadays. But it remains a Chaplin masterwork that deserves rediscovery.

It's a Chaplin masterpiece and showed a layer to his work that I never knew existed.

Audience Reviews for A Woman of Paris: A Drama of Fate

This was a good movie, a sad, romantic, and sometimes a bit humourous story, with good actors. Just note that Chaplin only directs the movie, he doesn't act in it. Overall, it's a good movie, but there were a couple of boring scenes in the middle of the movie.

What distincts A Woman of Paris is the line between its overt melodrama and the glorious feature-film period in which Chaplin entered with The Kid.Here,he experimented without his beloved Charlot and yet,Menjou is stellar and so is the usually briosa Purviance. Predictable and sticking to the strictly condemned love affair,I can only applaud the effort,plus the ironic output,even if he isn't at his most magnificent.

Charles Chaplin is not the star of this, his first serious drama. It's a silent film but Chaplin's direction of actors is so good that they don't overact, all seems very natural. the story is full of controversial or indecent themes for the time it was made (rebellious children, sex outside matrimony, women's lib). A very subtle novelty, as Chaplin said "it's all about how men and women tend to hide their emotions"

A Woman of Paris: A Drama of Fate Quotes