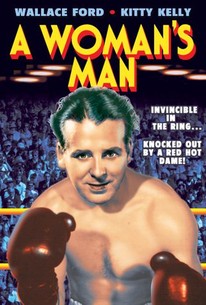 This 1934 B-picture from director Edward Ludwig stars Kitty Kelly as Gloria Jordan, a washed-up movie star who attempts to elevate her own status by dating promising middleweight boxer Joe Flynn (Wallace Ford). Joe falls for Gloria's advances, and she soaks up the limelight while he wins one bout after another. The night before a key title fight, however, Joe learns that Gloria has been unfaithful to him. Heartbroken, Joe takes a knockout punch in the said bout.

Critic Reviews for A Woman's Man

There are no critic reviews yet for A Woman's Man. Keep checking Rotten Tomatoes for updates!

There are no featured reviews for A Woman's Man at this time.