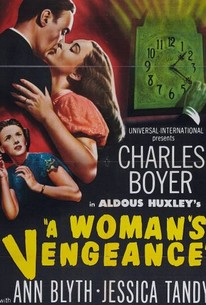 This film concerns a "likely" murderer, played by Charles Boyer. It is no secret that Boyer is enamored with young Ann Blyth, but is his love for the girl motive enough for Boyer to murder his invalid wife? Only family friend Sir Cedric Hardwycke believes in Boyer.

Frederic Worlock
as Bit
View All

Critic Reviews for A Woman's Vengeance

Some of the cinema's most gifted humans pool their talents in A Woman's Vengeance, but the result is only a moderately interesting melodrama.

There are no featured reviews for A Woman's Vengeance at this time.