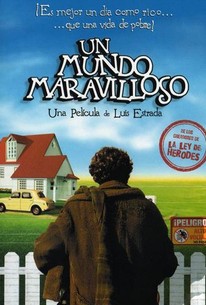 A simple homeless man in search of a warm place to sleep is exploited by politicians eager to prove that poverty in Mexico has been eradicated in Herod's Law director Luis Estrada's caustic satire concerning the effect of globalization on Mexican citizens. A press conference has been held to proclaim that there are no more poor people in Mexico, but homeless Juan Pérez (Herod's Law star Damián Alcázar) still can't seem to find a place to rest his weary head. After wandering into the World Financial Center headquarters and ending up on an elevated window ledge, Juan awakens to find that the public and press assume he is making a political statement against the powerful institution's neo-liberal stance. As Juan is swept up by the political machine that remains unwilling to admit their claims of conquering poverty may have been made in haste, the wandering tramp is given a spotless home in the suburbs and thrust into the international spotlight. But fame is a fickle thing in the 21st century, and rising to the top only means that one has farther to fall when the next media distraction takes center stage.

Critic Reviews for A Wonderful World

Estrada's most incendiary proposition: that God is, at heart, a hoi polloi construct, a buffer and security blanket that damagingly keeps the world's many harsh realities at bay.

Audience Reviews for A Wonderful World

Entertaining, but a little raw.