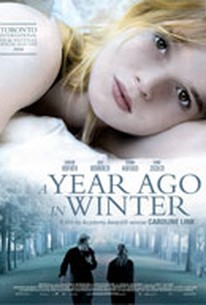 Year Ago In Winter Photos

A Year Ago in Winter (2008), directed by Caroline Link (German, b. 1964 ), and based on the novel The Aftermath by American author Scott Campbell will have a weeklong run at MoMA, from January 6 through January 11, 2010. It is the story of a grieving mother who commissions an artist to paint a portrait of her children: her 19-year-old son, whose recent death in an accident weighs heavily on the family, and her still-living 22-year-old daughter, who is a dancer struggling to reclaim her life after her brother's sudden death. While the story centers on the way the family deals with the strong emotions of their loss, the relationship between the family members and the artist adds a separate plotline that relates to the healing power of art. The creation of the painting ignites passions, exposes loyalties, and ultimately offers the promise of a new beginning. MoMA Presents: Caroline Link's A Year Ago in Winter is organized by Rajendra Roy, The Celeste Bartos Chief Curator of Film, The Museum of Modern Art, with the support of IFC Films. --© NY MOMA

Critic Reviews for Year Ago In Winter

We learn that decorum, nice bottles of wine, and home-cooked dinners can't hide the cracks beneath.

Audience Reviews for Year Ago In Winter

There are no featured audience reviews yet. Click the link below to see what others say about Year Ago In Winter!

Year Ago In Winter Quotes