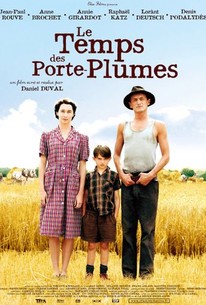 A Year in My Life Photos

The gently evocative, nostalgia-seeped autobiographical drama A Year In My Life cinematizes writer-director Daniel Duval's recollections of his youth in 1950s France. As a thinly-veiled onscreen fictionalization of the filmmaker, Raphael Katz is Pippo, a 9-year-old boy whose parents are arrested and thrown into jail under enigmatic circumstances - leaving him in dire need of guardians. Thrown into an orphanage, he is promptly adopted by a young French farm couple: the taciturn Gustave (Jean-Paul Rouve) and his wife Cecile (Anne Brochet. Per its title, the film observes events in Pippo's life over the course of the following year, from his slight and harmless brushes with authority figures at the local school, to his decision to befriend an octogenarian widow (All Night Long's Annie Girardot) shamelessly rumored by his classmates to be a witch. Made and released in 2006, this feature represented filmmaker Duval's first major cinematic outing since the 1979 French blockbuster La Derobade.

Critic Reviews for A Year in My Life

There are no critic reviews yet for A Year in My Life. Keep checking Rotten Tomatoes for updates!

There are no featured reviews for A Year in My Life at this time.

A Year in My Life Quotes