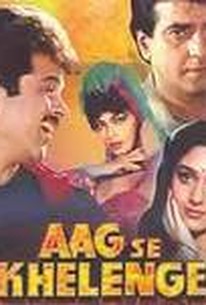 Police inspector Shekhar Kapoor (Jeetendra) agrees to work with an undercover cop (Anil Kapoor) to bring down a local underworld don and his son. But big problems arise when Shekhar finds out that his accomplice isn't who he claims to be. Just who is this shadowy figure, and what side of the law is he on? Amrish Puri, Shakti Kapoor and Meenakshi Sheshadri co-star in this Bollywood thriller.

There are no critic reviews yet for Aag Se Khelenge. Keep checking Rotten Tomatoes for updates!

There are no featured reviews for Aag Se Khelenge at this time.