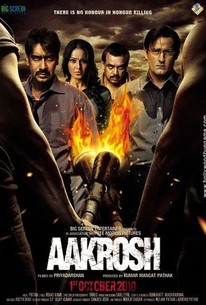 Two upstanding CBI officers contend with racial tension and conflicting ideologies while investigating the case of three missing Delhi University students in Jhanjhar, Bihar. Upon arriving in the village to conduct their investigation, detectives Sidhant Chaturvedi (Akshaye Khanna) and Pratap Kumar (Ajay Devgn) quickly realize that local Police Chief Bhura Ram (Paresh Rawal) doesn't care about solving the crime. Meanwhile, the Shool Sena is revealed to be in lock step with the local authorities. As the situation continues to deteriorate, Sidhant and Pratap become embroiled in a controversy involving the daughter of a powerful local. ~ Jason Buchanan, Rovi

Any film that points out that modern India condones the sort of age-old bestial entitlement that allows people to rape and kill with impunity needs to be seen. But did it have to be so relentlessly violent?

Aakrosh is essentially an all-guys act, with Ajay, Akshaye and Paresh providing enough punch to keep the drama racy, riveting and topical too.

Nikhat Kazmi
The Times of India
View All Critic Reviews (2)

One of the best works by Priyadarshan in Hindi. It's a mirror to the dark aspects of Indian society, dealing with a lot of issues from honour killings and anti-dalit violence to domestic violence. The story is predictable, but the screenplay is compelling enough. I'm not sure how this film will appeal if you have already seen "Mississippi Burning", but I think Priyan did a good job in porting it to Indian scenario, as ever :)