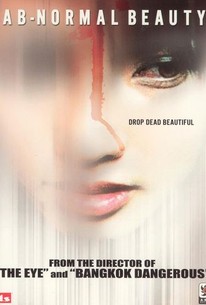 Members of the Hong Kong pop group 2Rs star in director Oxide Pang's Ab-normal Beauty. Race Wong plays Jin, a talented art student whose photographs routinely win her school's prizes. Race's older sister Rosanne Wong plays Jas, Jin's best friend, with whom she shares an extremely intimate relationship. Despite the accolades she receives, Jin is dissatisfied with her work. One day, she witnesses a fatal car accident, and impulsively turns her camera on the dying victim. It's a breakthrough for Jin, and she begins to grow more and more obsessed with photographing death. Jin is being pursued by Anson (Anson Leung of One Night in Mongkok), a fellow student who follows her around with a camcorder. Jin tries to make it clear to Anson that she's not interested, but he continues to dog her. As Jin becomes more and more obsessive about death images, she begins flashing back to a traumatic childhood incident of sexual abuse. Jas helps her to confront her past, but just as it seems she is ready to move on with her life, she receives a portfolio of disturbing photos and a videotape of what appears to be a woman being tortured to death. Ab-normal Beauty had its U.S. Premiere at the 2005 Asian American International Film Festival.

It's a highly stylized voyeuristic tormented artist shocker of a horror thriller that is more gruesomely enigmatic than entertaining.

Whether a moody thriller or a twisted head-trip, Ab-normal Beauty is an exquisitely disorienting portrait of an artist as a troubled soul - beautiful, bloody and rather bewildering.

Until the mystery is uncovered, Pang keeps the razor tension at a satisfying peak.

It didn't completely turn out the way I thought it would. Had this been made in Europe or Hollywood I think they would have gotten more of the subject matter. It's still not a bad movie. Starts off well I thought and ends brutally too, but the middle part was a bit slow. Well acted and stylishly shot, but a missed opportunity.

Man this was boring. This is the first Korean movie that disappointed me (although I'm pretty new at Korean movies). I always thought that Asian movies are supposed to be extremely scary. This does have some scary moments. But it was too slow and almost killed me. The twist at the end was obviously a good one. But that doesn't make this any good.

The begining is an interesting view of an artistic obsession spiralling out of control, but I feel the ending was somewhat lacking in punch despite how graphic it was.

A pretty solid Korean suspense film. It doesn't deliver many scares, but puts forth a very interesting premise that is occasionally compromised by adding too much to the plot. Some of the subplots didn't really seem to move the story forward, and a few scenes dragged. The Wong sisters, playing the two female main characters, have a lot of screen presence and acting talent. All of the other major performances are pretty slow. Ab-Normal Beauty's final strength is its visual construction. The movie is absolutely gorgeous, both in cinematography and in composition. Even all of the actors are beautiful.