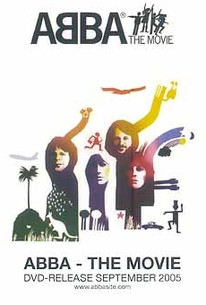 ABBA, the spirited Swedish pop-singing group who skyrocketed to fame with their 1974 single "Waterloo," star in this loosely constructed vehicle. The story involves the efforts of a diligent DJ to secure an interview with the group while they're on tour in Australia. Eighteen of ABBA's hits are heard on the soundtrack and seen in grainy 16 mm concert footage, shot in March 1977. ABBA: The Movie was thus filmed some five years prior to the group's breakup. The film's director was Sweden's Lasse Hallström, who later gained infamy for his arthouse success My Life as a Dog (1985). ~ Hal Erickson, Rovi

Björn Ulvaeus
as Himself

Benny Andersson
as Himself

Agnetha Fältskog
as Herself

Anni-Frid Lyngstad
as Herself

Stig Anderson
as Himself

Critic Reviews for ABBA: The Movie

Hallstrom creates such a giddy environment of interviews and stage domination, it easy to get sucked into the touring whirlwind and appreciate this special moment in the history of a legendary group.

Audience Reviews for ABBA: The Movie

Live footage of ABBA is extremely rare - basically, you've got this and you've got the documentary Abba In Concert and that's it for official releases. The performance on here is stellar and amounts to about 12 songs and it's easy to see why they were such a sensation, this movie captures them performing in front of probably their most rabid fans, the Australians who really launched their career after the rest of the world saw them as another Eurovision 1-hit wonder. The connecting material of a journalist trying to get an interview with the band is exceptionally lame and you'll never want to see it more than once, but the footage of the band performing "S.O.S.", "I've Been Waiting For You", ""Tiger", "Dancing Queen", and "So Long" with such gusto makes it worth the endurance.

Light-hearted Aussie comic romp. Good concert footage, but it felt like their footage was simply intercut with the framing story of the reporter trying to get an interview with them, chasing them all over Australia. If you love ABBA, you'll love this movie. I was surprised how many young fans they had. If you're not an ABBA fan, I wouldn't expect this movie to hook you to their tunes.