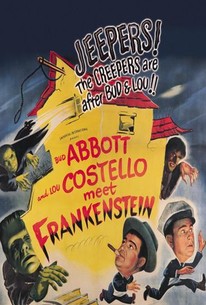 Critics Consensus: A zany horror spoof that plays up and then plays into the best of Universal horror cliches.

Critic Consensus: A zany horror spoof that plays up and then plays into the best of Universal horror cliches.

It seems that Count Dracula (Bela Lugosi), in league with a beautiful but diabolical lady scientist (Lenore Aubert), needs a "simple, pliable" brain with which to reactivate Frankenstein's creature (Glenn Strange). The "ideal" brain belongs to the hapless Lou Costello, whom the lady doctor woos to gain his confidence and lure him to the operating table. Lawrence Talbot (Lon Chaney Jr.), better known as the Wolf Man, arrives on the scene to warn Costello and his pal Bud Abbott of Dracula's nefarious schemes. Throughout the film, the timorous Costello witnesses the nocturnal rituals of Dracula and the Monster, but can't convince the ever-doubting Abbott--until the wild climax in Dracula's castle, where the comedians are pursued by all three of the film's monstrosities. As a bonus, the Invisible Man (voiced by an unbilled Vincent Price) shows up for "all the excitement." ~ Hal Erickson, Rovi

Glenn Strange
as The Monster

Clarence Straight
as Man in Armor

This 1948 effort is probably the last of their watchable films, though it's a long way from their best.

The notion of having these two clowns run afoul of the famous screen monster is a good laugh in itself. But take this gentle warning: get the most out of that one laugh while you can, because the picture, at Loew's Criterion, does not contain many more.

This is one of the best of all the Abbott and Costello features.

Were it not for the goofy leads, this could very well be yet another chapter in the series of classic monster mashups, which had fizzled out of theaters a few years prior.

Even those of us who find Bud and Lou's antics more dated than those of, say, Laurel and Hardy or the Marx Brothers, can still enjoy this one, because the monsters are a hoot.

It may prove a less satisfying offering than usual to devotees of the slim and stocky funsters. Abbott and Costello prevail, however, over the chilly doings of such competent scare artists as Bela Lugosi and Lon Chaney.

The first of three films to pair the comedy team with Universal's monsters. Moderately amusing.

A masterpiece filled with raucous laughs, great spooks, and a wicked final scene.

This is the best of the boys' efforts, allowing them to go for the nyuks yet never diminishing the standing of the classic Universal Studios monsters that figure in its plot.

While the the film is representative of the absolute worst of Universal horror... it is one of the very best Abbott and Costello vehicles.

By 1948, the Universal monsters were on their way out of fashion. Dracula, Frankenstein, the Wolf Man, all had been popular for many years, but other trends (such as UFO invaders) were coming to the fore by the late forties. Abbott and Costello on the other hand, were just coming into their peak, and with "Abbott and Costello Meet Frankenstein" they took their career on a whole other path (this was the first of several "Abbott and Costello Meet..." pictures). Anyhow, Abbott and Costello play a pair of bumbling freight handlers who are supposed to deliver Dracula's actual remains and Frankenstein's actual monster to some house of wax museum, but when they get there, Dracula wakes up and steals the monster for some nefarious scheme. Dracula and his scientist partners decide to replace the monster's brain with Lou Costello's, because this will supposedly make him more docile and easy to control. Meanwhile, the wolf man (Lon Chaney Jr.) learns of Dracula's scheme and soon arrives to try and stop him. There are some goofy gags and some slight scares, and the film strikes a nice balance between comedy and (light) horror. Fun.

Dracula: What we need is young blood... and brains...  "Jeepers. The creepers are after Bud and Lou." Abbott and Costello Meet Frankenstein is a silly classic that includes some of the major Universal Studio monsters of the time; including Wolfman, Dracula and Frankenstein. It is not all that funny now, but back in the flurries when it came out; it was probably hilarious. It's still a semi-fun film to watch from time to time. The best thing about the movie is the monsters and the plot isn't horrible either. Dracula plans on bringing Frankenstein back and having him have no will of his own so that Dracula can control him. Abbott and Costello then get involved in the story and silly slapstick ensues. That is what I don't like about it. The comedy just doesn't work anymore. I chuckled a couple of times, but that was about the extent to what the comedy did for me. It's not a bad movie, but I'd rather just watch the old monster movies without Abbott and Costello. It may be a classic, but it definitely isn't a must watch classic.

I liked this movie it's fun and has both comedy and horror movie stars. And of course, it's very funny.