Abbott and Costello Go to Mars1953 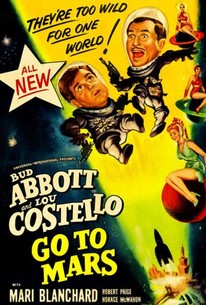 In this sci-fi comedy adventure, the two comedians accidentally end up launching a rocket ship they were supposed to load with supplies. They then embark upon a series of crazy adventures as they first land in the midst of New Orleans Mardi Gras. Later, they end up on Venus and must deal with beautiful but man-hating women.

James Flavin
as Policeman in Bank

Russ Conway
as Policeman in Bank

Syd Saylor
as Man at Fountain

Bobby Barber
as Man
View All

Critic Reviews for Abbott and Costello Go to Mars

A would-be mirthfest that is so aggressively unfunny that it generates laughs for the wrong reasons.

Even for Abbott and Costello fans, this must be trying.

Audience Reviews for Abbott and Costello Go to Mars

A goofy, silly movie, but fun. Overall, it's not a good movie, but if you like Abbott and Costello, you'll enjoy it anyway.

Not the best Abbott and Costello Film but still very enjoyable as the boys, get in a rocket ship and accidentally launch it, they buzz around NYC and land in Louisiana outside New Orleans but thy think they are on Mars as everyone is running around in Mari Gras Costumes. They run in to two bank robbers who also get on the ship and they once again launch and this time land on Venus with nothing but beautiful women. Can only give this one 3 1/2 stars as just not the over the top comedy as seen in other films.

More original gags than some of their later films. Manages to keep your interest throughout. A fun outing.

Great, if you're a kid. Well, maybe a kid back in my time, perhaps today's kids would boo this out of the theaters. Still, I find it fun. So there.