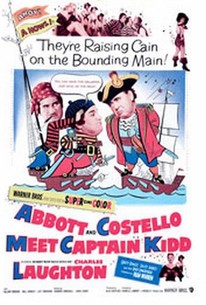 Though out of favor with many Abbott and Costello buffs, Abbott and Costello Meet Captain Kidd is actually a lot of fun, so long as the viewer parks logic and dignity at the door. Captain Kidd is played by no less than Charles Laughton, who reportedly agreed to sign up for this film because he wanted to learn how to perform a comedy double-take. Bud Abbott and Lou Costello are cast as Rocky and Puddn'head, waiters at a pirate hangout on the island of Tortuga. Entrusted with a love letter written by the beautiful Lady Jane (Fran Warren) to cabaret singer Bruce Martingale (Bill Shirley), Puddn'head manages to get this missive mixed up with a treasure map coveted by both Captain Kidd and his rival, lady pirate Captain Bonney (Hillary Brooke). The upshot of all this finds Rocky, Pudd'nhead, Lady Jane and Bruce being shanghaied by Kidd, setting the stage for a climactic treasure hunt and chase on a faraway island. Laughton takes to broad slapstick comedy like a fish to water; indeed, at times he's a lot funnier than Bud and Lou! Filmed in Cinecolor, Abbott and Costello Meet Captain Kidd was the second of the team's independent productions for Warner Bros. release; like the first, Jack and the Beanstalk, it was well received by the public, even while critics tore their hair and gnashed their teeth.

Bobby Barber
as Man
View All

Since everything about the film is substandard, Charles Laughton also seems to be taking a vacation from his usual, more esteemed works, despite reprising his role from 1945.

plays more like a long television show than a feature film, which gives it a level of energy and fun

Overall, the big production seems to keep the comedy team on their toes, and, while this never reaches the highs of their best films, it also feels a lot less lazy than their worst efforts.

The only genuine point of interest is seeing Charles Laughton get his wish to play the buffoon.

Typical fare for the duo enlivened by Laughton.