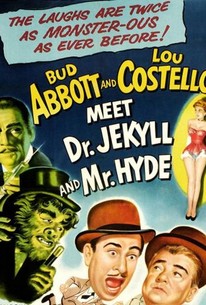 This was the last in a string of spoofs that found the comedy duo tangling with various classic Universal Studios monsters. In this case, Slim (Bud Abbott) and Tubby (Lou Costello) play American detectives who cross wits with Dr. Henry Jekyll (Boris Karloff) in Edwardian-era London when they visit to compare techniques with their British counterparts. Meanwhile, Dr. Jekyll is conducting the usual lab experiments on animals before injecting himself with serum, transforming into the vicious Mr. Hyde and launching a killing spree against fellow doctors who scoffed at him. Slim and Tubby participate in the ensuing investigation, and havoc breaks out when Tubby himself is injected, with predictable results. Karloff lends gravity to the film, but by the time this one followed up earlier efforts like Abbott And Costello Meet Frankenstein and Abbott And Costello Meet The Mummy, the team had mostly exhausted the series' comic possibilities.

Judith Brian
as Woman on Bike

Gil Perkins
as Man on Bike

Michael Hadlow
as Bobby
View All

Surely, this isn't the best of Abbott and Costello, as they've been so much funnier in the past.

Bud and Lou meet another monster for infrequent laughs.

Passable Abbott and Costello entry with plus of Karloff.

Corney as hell but I loved them.

Should have been better, I love when A & C meet monsters, but this is probably one of the lesser of their monster films.