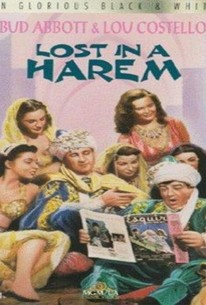 Lost in a Harem is arguably the best of Abbott & Costello's trio of MGM films; it's certainly the silliest, with any number of nonsensical plot twists and sidesplitting gags. This time, Bud Abbott and Lou Costello play Pete and Harvey, two American magicians stranded in a mythical Arabian Nights kingdom with songstress Hazel Moon (Marilyn Maxwell). Our heroes and heroine become involved with the trials and tribulations of Prince Ramo (John Conte), who hopes to rightfully reclaim his throne from his evil usurping uncle Nimativ (Douglas Dumbrille). Alas, the villain is armed with a pair of hypnotic rings with which he forces everyone to do his bidding: his most anti-social act is to kidnap and hypnotize the entire Jimmy Dorsey Orchestra! Pete, Harvey, Ramo and Hazel risk death at every turn to thwart Nimativ, encountering a giant guard (Lock Martin, later to play the robot Gort in The Day the Earth Stood Still), a gibbering lunatic (Murray Leonard) and a bevy of harem beauties along the way. The film's sets and costumes, as well as the more elaborate musical numbers, are "borrowed" from the recently completed MGM superproduction Kismet. While the plot is for the birds, Lost in a Harem is saved by the fast-and-furious antics of Abbott and Costello. And as a bonus, this is the film in which Bud and Lou, accompanied by Murray Leonard, perform those deathless burlesque classics "Slowly I Turned" and "Mike's Place."

Murray Leonard
as The Derelict

Jimmy Dorsey
as Himself

Critic Reviews for Lost in a Harem

There are no critic reviews yet for Lost in a Harem. Keep checking Rotten Tomatoes for updates!

Audience Reviews for Lost in a Harem

Sometimes funny, mostly boring, and an awfully too silly movie, it's kind of sloppy.

Lost in a Harem Quotes