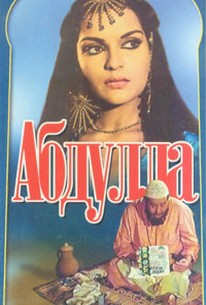 Abdullah is a devout Muslim who lives in a small hut the middle of a desert in Persia, and looks after a well so that it provides water to thirsty travelers. One day a friend, Ameer, informs him that bandit Khaleel had raided a settlement nearby, killing everyone except for Yashoda, a pregnant woman. Shortly thereafter, Ameer himself is killed, a mortally wounded Yashoda gives birth to a boy, names him Krishna, asks Abdullah to care for him, and passes away. Abdullah overcomes his fears of bringing up a Hindu boy, and looks after Krishna as his own. Then Khaleel's Magician informs him that he is going to die at the hands of Krishna, just as Bhagwan Shri Krishna was known to have slain Kans, his maternal uncle, so also will Khaleel's life end at this Krishna's hands. Angered at this, Khaleel sets out to kill Krishna. He attacks Abdullah, abducts Krishna and readies him for a sacrifice, that will get rid of any threat against him. Will fate intervene to save Krishna, or will Khaleel succeed in sacrificing him?

There are no critic reviews yet for Abdullah. Keep checking Rotten Tomatoes for updates!

My Previous comment before seeing: I feel so ashamed not to have watched this Movie till now. A Movie directed by Sanjay and what am I waiting for? How Dare ME?!! I was told this Movie contents everything I like in Movies. Based upon a true story. It is funny, sometimes I read Directed by Sanjay and sometimes by Raj Kapoor. I know that it was produced by Sanjay Khan. But now who really directed it? Will get my answer when I see it. I know the Trademark of Both Sanjay and Raj Kapoor as Directors. After watching: Well I think I expected a tiny bit much than this Movie gives. Its surely nice but a tiny bit too much violence and little about Abdullah. Well it was nice to watch it though I had to forward many parts, perhaps its just me who doesnt like so much violence or my expectetions were too high. I dont know. Still I would recommend it. It was directed by Sanjay Khan, no doubt!