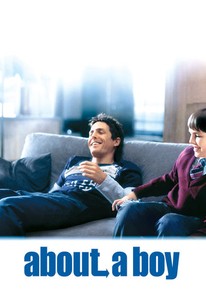 Critics Consensus: About a Boy benefits tremendously from Hugh Grant's layered performance, as well as a funny, moving story that tugs at the heartstrings without tilting into treacle.

Critics Consensus: About a Boy benefits tremendously from Hugh Grant's layered performance, as well as a funny, moving story that tugs at the heartstrings without tilting into treacle.

Critic Consensus: About a Boy benefits tremendously from Hugh Grant's layered performance, as well as a funny, moving story that tugs at the heartstrings without tilting into treacle.

About a Boy Videos

About a Boy Photos

Will is a 36-year-old underachiever with a fear of commitment that leads him to seek out relationships with single mothers, on the assumption that they are more desperate. However, plans go awry when he befriends with Marcus, the weird 12-year-old son of his latest target. Soon, Will and Marcus become friends, and as Will teaches Marcus how to be a cool kid, Marcus helps Will finally to grow up.

Hugh Grant
as Will

Lorna Dallison
as Woman in Supermarket

Bethany Muir
as Child in Supermarket

News & Interviews for About a Boy

View All About a Boy News

Critic Reviews for About a Boy

Even people who don't usually like Hugh Grant will be charmed by him in the scrappy, slightly scandalous comedy About a Boy.

The directors Paul and Chris Weitz -- the American Pie brothers -- have tried hard not to make a tearjerker, and at its best the movie is knowing and tart.

Mainstream comedies should all be this funny and tender and deftly performed.

Hugh Grant hilariously redefines the word "playboy" in the first half of this film, then gets human, without losing his comic edge, under the influence of the title waif.

About a Boy is better than a feelgood movie, it's a feelgreat movie -- genuinely clever, affecting when you least expect it to be and funny from start to finish.

Compared to High Fidelity, the book and the movie, About A Boy seems resolutely uncool.... But part of growing up may be admitting that such familiar comforts can also be immensely satisfying.

The film has tremendous star power, added to this fact, it's a remarkably warm and witty film, filmed with unique creativity and visual gusto, and a catchy soundtrack.

The splendid effectiveness of 'About a Boy' lies fully in the precise work of adaptation that the Weitz brothers make of the original text. [Full Review in Spanish]

In print. Hornby's story was lapped up by women. On screen, it looks likes the worst kind of unconvincing, unfelt schmaltz, and faintly misogynist in the subordination of its female characters to the needs of its male star. Come back, Richard Curtis.

While the movie has some awkwardly executed scenes and slow spots... this is a comedy with a heart... It's funny, it's smart, it's poignant - and it's set on Planet Earth.

...a thoroughly average piece of work...

If the story gets dangerously thin, Grant is pretty well flawless. And Collette, always good, is heartbreakingly believable.

Audience Reviews for About a Boy

Nicey nice British comedy. Not even remotely believable in any way. It has not stood up to a rewatch. I remember initially enjoying this, but over 10 years later, the message is a bit irritating, and so is Toni Collette here. Still, if you don't dig too deep, it is enjoyable enough. Not a must see, but sugary fluff for the background.

"I am an island. I am bloody Ibiza!" Based on Nick Hornby's best-selling novel, About A Boy is the story of a cynical, immature young man who is taught how to act like a grown-up by a little boy.

REVIEW
I think I smiled all the way through `About a Boy,' a comic near-masterpiece derived from the best-selling novel by Nick Hornby. For the sake of accuracy, both the novel and the film should more rightly be titled `About Two Boys,' since the story focuses not only on 12-year old Marcus, but on 38-year old Will, a man totally dedicated to the proposition that any man who so desires can live quite happily on his own private little urban island, thank you very much. Will's `island' is his own London flat, which he has equipped with all the accoutrements of comfort and diversion that modern technology - in the form of computers, big screen TV's and DVD players - can afford. Who needs people when you have so much `stuff' to keep you content and occupied? Will thrives in his environment, much to the chagrin of his married couple friends who keep insisting that he must certainly be miserable without a wife and family to give his life meaning. `About a Boy' establishes a tone and sticks with it to the end. The screenplay by Peter Hedges, Chris Weitz and Paul Weitz (the latter two function as the film's directors as well) manages to take a potentially clichéd and predictable story and invest it with a warmth, wit and tenderness that are all-enveloping. The voice-over narration by both Will and Marcus, which introduces us to their characters and keeps us informed as to their mental progress throughout the film, is remarkably clever and droll. Yet, the characters never come across as smug, smart-alecky or flippant. Rather, they speak and behave in ways that are both believable and realistic. Hugh Grant gives his richest performance to date as Will, the man who refuses to grow up and assume the role of responsible adult, blithely unaware of the emotional depths that lie hidden under a surface of apathy and indifference. The superb Grant is more than matched by then newcomer Nicholas Hoult, an extraordinarily gifted young actor who doesn't look like the average `adorable' screen kid, and who makes Marcus into a very real, very likable and very sensitive young man. The remainder of the large cast is outstanding as well. Moreover, the film is very astute in its observation about just how easy technology has made it for us to isolate ourselves from one another.

Rated this high cause I dig Badly Drawn Boy. And cause if must do a chick-flick, you could do a lot worse.

About a Boy Quotes