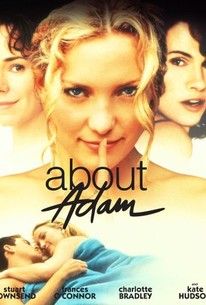 Critics Consensus: Although some of the characters' motivation may not be that clear, the movie is still a funny and sexy charmer.

Critics Consensus: Although some of the characters' motivation may not be that clear, the movie is still a funny and sexy charmer.

Critic Consensus: Although some of the characters' motivation may not be that clear, the movie is still a funny and sexy charmer.

Gerard Stembridge directs this charming comedy about a handsome stranger who wreaks havoc on an entire family. Pub torch singer Lucy Owen (Kate Hudson) falls for Adam (Stuart Townsend) as soon as she lays eyes on him. Tired of a string of failed short-termed relationships, she succumbs to Adam's radiate charisma and agrees to marry him after only knowing him for a scant couple of days. Yet when she brings him home to her family, she finds to her dismay that his magnetism works equally well on her two older sisters. The middle one, Laura (Frances O'Connor), is a shy bookish sort whose love for poetry proves to be her weakness, while eldest sister Alice (Charlotte Bradley) is aloof at first, but eventually she also yields to his wiles. This film was screened at the 2000 Sundance Film Festival.

Aoife Maloney
as Customer 2
View All

Critic Reviews for About Adam

Townsend ... makes quite an impression in the title role.

Stembridge makes the twists as pleasantly surprising as the dawning realization that you've gone from judge to accomplice.

Stembridge keeps things bustling along at a lively enough pace to deflect any introspective focus on the matchups that are never presented as relationships, only flings.

For his part Townsend does Adam with a lightness of touch that fits in with the film's cheery view of his unscrupulousness.

It's smart, it knows its audience can join dots and it actually makes you think about - and not just laugh at - the messes that people get themselves in over four letters.

While the film strives to prove its cool, it's also built on [an] insufferably antique idea.

An airy, accented romantic comedy romp of infidelity and animal attraction [that hinges on] your personal threshold for average, of-the-moment romantic comedies.

The movie is upbeat, unpredictable and is a smart romantic comedy in a season of half-hearted attempts.

It seems like several articles from FHM all rolled up into one. At least just reading the articles would have been a lot more entertaining.

Audience Reviews for About Adam

Every once and a while they let Kate Hudson be in a good movie ("Almost Famous," "Dr. T & the Women," "The Skeleton Key," "Nine," "The Killer Inside Me") and "About Adam" is certainly one of them. Unfortunately, Hudson is the very weak link in this terrific cast. Her abominable Irish accent (and subsequent singing in said accent) nearly topple the film in the first 3 minutes, but stick around, because there is plenty of fun to be bad. Stuart Townsend is sexy and sly as a man who charms his way into the private lives of three sisters and their brother. The film may be unscrupulous and naughty, but that's all apart of the whimsy. "About Adam" is a devilish Irish comedy full of deceptive surprises and wit to spare. If you are looking for a first rate romantic comedy with bite and energy, "About Adam" is your ticket.

This movie was HILARIOUS! Stuart, you ROCK!!