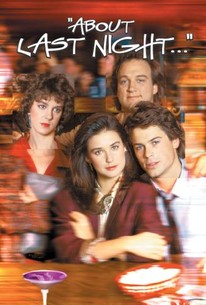 Critics Consensus: About Last Night will perturb fans of the original stage play by sanding down its pricklier edges, but an amiable cast and sexual frankness make this a pleasantly grounded romantic comedy.

Critics Consensus: About Last Night will perturb fans of the original stage play by sanding down its pricklier edges, but an amiable cast and sexual frankness make this a pleasantly grounded romantic comedy.

Critic Consensus: About Last Night will perturb fans of the original stage play by sanding down its pricklier edges, but an amiable cast and sexual frankness make this a pleasantly grounded romantic comedy.

David Mamet's play +Sexual Perversity in Chicago was adapted for the big screen by fellow Chicago citizen Tim Kazurinsky and became About Last Night... The film stars Rob Lowe as Danny and Demi Moore as Debbie. The pair meet and engage in a torrid sexual relationship, but then slowly negotiate if there is anything more between them. Lowe seeks advice from his loudmouthed friend Bernie (Chicago native James Belushi), whose offers little more than outrageous tales of his randy exploits. Debbie confides in her best friend Joan (Elizabeth Perkins), a bitter, single kindergarten teacher who has lost any hope of finding the right person on the dating scene. Although Danny and Debbie talk, they have trouble communicating. The film ends on a coda that suggests the pair are still unsure as to where their relationship may be headed.

Kimberly Pistone
as Girl at Bar

Steven Kckholdt
as Man in Bar

Steven Eckholdt
as Man in Bar

Critic Reviews for About Last Night

Writers DeClue and Kazurinsky have created a recognizable geography for every age; you suspect that About Last Night will set off pangs of identification everywhere.

Engaging performances from the two leads are complemented by a witty script with some great one-liners, and five-star support from James Belushi.

Homework assignment: Is the decision to change both the title and the thrust of Mamet's play evidence of perversity or of perversion? Due tomorrow. Class dismissed.

The shocks of recognition are largely absorbed by the standard narrative structure that replaces Mamet's blackouts; the characters, instead of functioning as archetypes, look underwritten, half alive.

This is the yuppie drama that St. Elmo`s Fire wanted to be but wasn't.

Film lacks much of Mamet's grittiness, but is likable in its own right.

About Last Night... is occasionally wonderful, but inevitably disappointing.

Lowe and Moore do well as the on-again, off-again partners, although it is James Belushi, in an over-the-top supporting performance his brother John would have been proud of, who all but walks off with the show.

What emerges on the screen, however, is largely bland and prettified, virtually indistinguishable from any other trendy Hollywood romance of its period.

It takes a lot in order for Jim Belushi to be the best actor in something.

Starts out strong and has potential, but then deteriorates into soap opera and endless montages.

Audience Reviews for About Last Night

Somehow, I missed watching this one, though I love 80's movies and have watched almost all the well known ones, and plenty not so well ones too. Probably on account of the cast. Never have been a fan of Demi Moore or Rob Lowe. Well, this movie didn't change that especially, but I did quite enjoy this. Demi is actually quite tolerable here, though the standout for me was bitchy Elizabeth Perkins. She had the best lines. I do have to say, though, there was some fugly clothes here. I actually genuinely like 80's fashions, but these were frumpy. What were they thinking. The story itself is actually quite relatable and sweet in its way. Anyone who's lived with a partner or been married would relate to some of the struggles faced by the couple. It's not all happy times and that's exactly how life really is. Glad I had the chance to see this one finally.

The kind of movie that brings out the romantic in me and breaks my heart in the same proportion, depicting love and commitment with absolute sincerity and how all the conflicts and lack of real communication can sabotage a relationship and lead to certain discontentment.

While considered must see in its time its basic consideration (why buy the cow if you can get the milk for free?") has lost its impact. What's left are naked, anguished leads considering marriage while their buds vote "no" on the sidelines. I sadly kept waiting for the buds to hook up unfortunately.

A predictable, boring romantic drama that's only watchable for the sex scenes with the hot actors. Other than that, I don't care for this movie.