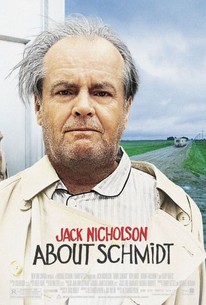 Critics Consensus: In this funny, touching character study, Nicholson gives one of the best performances of his career.

Critics Consensus: In this funny, touching character study, Nicholson gives one of the best performances of his career.

Critic Consensus: In this funny, touching character study, Nicholson gives one of the best performances of his career.

Warren Schmidt is a retired insurance salesman, who at age 66 has no particular plans other than to drive around in the motor home his wife insisted they buy. He's not altogether bitter, but not happy either, as everything his wife does annoys him, and he disapproves of the man his daughter is about to marry. When his wife suddenly dies, he sets out to postpone the imminent marriage of his daughter to a man he doesn't like, while coping with discoveries about his late wife and himself in the process.

Phil Reeves
as Minister in Denver

Robert Kem
as Priest in Omaha

Beth Heimann
as Wedding Singer No. 1

Linda Wilmot
as Wedding Singer No. 2
View All

Critic Reviews for About Schmidt

Heartfelt Nicholson, not for kids at all.

These filmmakers have a feeling for the isolation of blasted lives, but they also can't resist putting them down.

A poignant marker in the career of a major artist.

Ultimately this is a frustrating patchwork: an uneasy marriage of Louis Begley's source novel (About Schmidt) and an old Payne screenplay.

This is a startling, resonant, life-affirming movie -- both deeply funny and deeply moving.

Nicholson, emphatically off autopilot and acting entirely without vanity, perfectly captures Schmidt's fear, loneliness and fervent hope that his life is worth more than he's come to assume.

A character study that has the emotional richness of the great Italian and Eastern European films of the 1960s, in which humor and pathos rode up and down on the seesaw together.

[It] toys with convention, leading us down that happy ending path and then hopping off of it again. It's refreshing, if not humorously frustrating.

Sharply observed, Alexander Payne's poignant comedy is a character study of an ordinary American, who embarks on a journey of self-discovery and in the process becomes humanized and extraordinary.

About Schmidt is a touching, human story about a man who comes to the realisation that his life is nothing more than a failure.

"About Schmidt" is a hostility-provoking film for the same reason that American citizens have lost their civil rights. The picture endorses, nay lionizes, complacency, inaction and the privilege of the greedy to steal whatever they covet simply because th

Audience Reviews for About Schmidt

Jack Nicholson gives a nuanced performance as a square, one of those guys who defines himself by his job, at the end of the line and suddenly w/o that job. Now what? Agonizing reappraisal. A tender look into the heart of American darkness, ably assisted by a decent supporting cast.

Alexander Payne and Jack Nicholson together? Awesome! But seriously though, this is a great movie. It's a moving story, if a bit depressing, but it's told so well, and the performances are absolutely brilliant. Much was made about Kathy Bates' nude scene, but it's handled well, kinda fun (in a good way), and not a big deal. I'm not saying I liked seeing her naked, but c'mon, it actually could have been worse. Thankfully it's not cruel or exploitative. I don't want to watch Payne's films too often, even if they are absolutely fantastic. His mastery of dark humor and uncomfortableness is both good and bad. He does it so well, and makes it all work and watchable, but the problem is, it can be a bit too real, thus difficult to watch very often. That's definitely the case here. It's a little easier to handle Sideways, though. I like this movie a lot. It's funny, finely observed, and just really honest.

Another genuine, intelligent gem in Alexander Payne's short but ingenious filmography. Jack Nicholson turns in one of the best performances of his career in this profoundly realistic film from the master of the tragicomedy.

Schmidt is such a peculiar fellow, brilliantly played by Nicholson. His simplistic reserve and insulation have made him content in his routine of the past 42 years. This movie follows him as that routine is just absolutely shattered, nearly all at once, and we watch him struggle. Absurd characters, or caricatures really, abound to provide comic relief against the reality of Schmidt's situation -- maybe they are presented as Schmidt's impressions. I feel like this is only half the story. I really want to know what becomes of our "sad, sad, lonely man." But it ends in a touching way, so like Ndugu, I'll hope for the best.