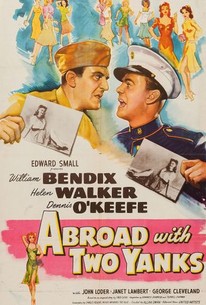 Allan Dwan directed this light-hearted service comedy starring William Bendix (best known from the television series The Life of Riley) and Dennis O'Keefe as a pair of Marines stationed in Australia. As might be expected, the two soldiers fall for the same woman, a pretty Australian named Joyce Stuart (Helen Walker), and comic misadventures ensue. John Loder, James Flavin and Arthur Hunnicutt are among the familiar faces in the cast.

John Abbott
as Salesman
View All

Good natured silliness, with some of the richest visual style in Dwan.

There are no featured reviews for Abroad with Two Yanks at this time.