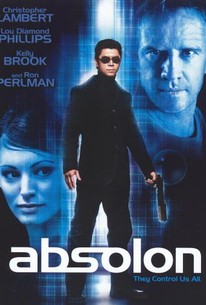 There are no critic reviews yet for Absolon. Keep checking Rotten Tomatoes for updates!

A made-for-TV movie. In the future, one company owns the patent for a cure that everyone needs to take to live. The good guys discover a cure, and the bad guys want to prevent this cure from becoming public knowledge. Pretty Mickey-Mouse movie.