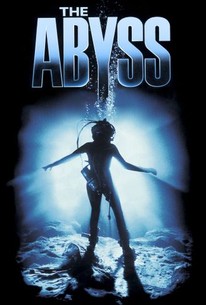 Critics Consensus: The utterly gorgeous special effects frequently overshadow the fact that The Abyss is also a totally gripping, claustrophobic thriller, complete with an interesting crew of characters.

Critics Consensus: The utterly gorgeous special effects frequently overshadow the fact that The Abyss is also a totally gripping, claustrophobic thriller, complete with an interesting crew of characters.

Critic Consensus: The utterly gorgeous special effects frequently overshadow the fact that The Abyss is also a totally gripping, claustrophobic thriller, complete with an interesting crew of characters.

The crew of an experimental, high-tech submersible is called into action to investigate a mysterious nuclear submarine crash. A series of strange encounters leads the crew to suspect the accident was caused by an extraterrestrial craft, and that they may be participating in an encounter with an alien species. However, in order to make contact, they must not only brave the abyss, an exceedingly deep underwater canyon, but also deal with the violent actions of one of their own crew members, an increasingly paranoid Navy SEAL officer. Approved by director James Cameron, The Abyss: Special Edition is an extended director's cut of the 1989 underwater science fiction epic, reinstating nearly a half hour of footage removed from the original release under studio pressure. Much of the restored footage places the film's events in a grander political context, as the crew's mission becomes a factor in the dangerous escalation of nuclear tension between the U.S. and the Soviet Union. The largest change involves the film's ending, which provides further information on the aliens' mission on Earth, bringing the film to closer to Cameron's intention: a modern remake of Robert Wise's The Day the Earth Stood Still. ~ Judd Blaise, Rovi

News & Interviews for The Abyss

The 20 Most Groundbreaking Sci-Fi Movies From 20th Century Fox

View All The Abyss News

Critic Reviews for The Abyss

A firstrate underwater suspenser with an otherworldly twist, The Abyss suffers from a payoff unworthy of its buildup.

The attempt to extract the essences of several genres (cold-war submarine thriller, love story, Disney fantasy, pseudomystical SF in the Spielberg mode) and mix them together ultimately leads to giddy incoherence.

This overlong concoction is scuppered by dire dialogue, histrionic performances and maudlin sentimentality.

Anyone looking for a discouraging word about this stupendously exciting and emotionally engulfing film should read no further. The Abyss confirms James Cameron as a world-class filmmaker.

If there was ever a monument to a director's hubris and terrible labor ethics, it's The Abyss.

A must-see for fans of the genre and for its uncommonly competent handling of suspense.

The Abyss was the summation of everything Cameron had done before, and a statement of purpose towards what he would be doing next.

The Abyss gains in some ways from its own Achilles heels, in a way most movies don't... its formal technique, its reckless obsessiveness, and its gutsy emotionalism are what I can't stop turning over in my mind.

One need not be a Cameron acolyte to recognise that The Abyss has aged better than some of the films that outshone it back in the day.

The movie was a bear to make and it shows onscreen, parading around a series of mesmerizing set-pieces that look deliciously hard-earned in ways our current CG-drenched filmmaking climate never allows.

Audience Reviews for The Abyss

What makes this film even more absorbing than its spellbinding visual effects is the strong sense of urgency and danger provoked by such a suffocating underwater scenario, and the special edition is even more meaningful in times of so much war and mindless destruction.

After the phenomenal action classic, Terminator, James Cameron pushed the boundaries yet again with astounding special effects with The Abyss. This is a special effects milestone that helped advance the use of CGI in film. The result is a very good looking film that has breath taking special effects. Cameron has always been keen on delivering a visual spectacle with his films and The Abyss definitely emphasizes that. In terms of special effects, The Abyss delivers some astounding effects. Where the film lacks slightly is in the story, the plot starts off well enough, but it ends somewhat on a dismal note. The film has an impressive cast of talented actors that are able to carry the film well enough to make it watchable, but halfway through the film; the story looses its fire and becomes a little silly. Of course that's a minor speed bump as you're more focused on the astounding visuals. The visuals are what really makes this film watchable, and this one of the films that James Cameron has made. The cast do a fine job with the script, and luckily the story manages to work for more than half of the film, but like I stated, it loses its fire slightly and some elements feel out of place. This is still a worthy film to watch despite its small flaws. There are more great things going for this film than bad things. Cameron crafted a fine special effects wonder that remains one of the best he's ever done.

The Abyss is one of the Wonderful and Beautiful Alien Movies I have ever seen. I liked the Idea Aliens Underwater.

James Cameron never fails to criticize humanity in his work, but the message here is plain and simple so that everyone can understand. Seriously cool and gorgeous special effects, amazing acting and a suspenseful story make this one claustrophobic, nail-biting thriller with interesting characters.