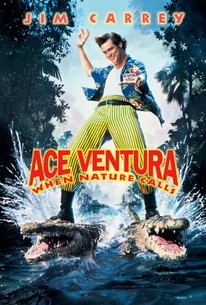 Critics Consensus: Nature Calls in this Ace Ventura sequel, and it's answered by the law of diminishing returns.

Critics Consensus: Nature Calls in this Ace Ventura sequel, and it's answered by the law of diminishing returns.

Critic Consensus: Nature Calls in this Ace Ventura sequel, and it's answered by the law of diminishing returns.

Looking for an evening of high-brow, intellectually stimulating, cinematic entertainment done with sophistication and panache? Look elsewhere! This riotous sequel has very little plot and scads of deliciously vulgar, politically incorrect and just plain idiotic humor as presented by the master of rubber-faced lunacy, Jim Carrey. As a sort of prologue, the great pet detective is assigned to rescue a racoon stranded on a steep Himalayan hillside. After much danger, Ace manages to reach the stranded critter only to accidentally send it hurtling to its death. Devastated, poor Ace enters a Tibetan monastery to search for peace. His quest is interrupted when a British emissary arrives and begs him to head for Africa to locate a stolen sacred white bat. If he does not, two warring tribes will abandon their peace-treaties and resume their bloody feud. Poor Ace is terrified of bats, so that is perhaps why the emissary declined to tell him what kind of creature he was seeking until it was too late for Ace to back out. Once in Africa, the mayhem really begins as he embarks upon a series of utterly tasteless and silly exploits that do not preclude a little social commentary at the expense of the Brits and a subtle message for animal rights.

Adewale Akinnuoye-Agbaje
as Hitu
View All

If the movie itself aimed higher, it could have drawn laughs without compromising Ace's anarchic sense of fun. But Ace is slightly nastier this time.

Carrey is really more clown than actor. And that's where the Jerry Lewis reflection comes in. Carrey is not just goony, he's beyond control, like someone in need of serious sedation (or at least some firm directorial guidance).

There's so little to watch besides Carrey, in fact, it makes you actually miss (gasp!) Sean Young from Ace 1.

Highlighted by a mechanical rhino skit (built and acquired out of thin air) that takes the cake on combining unrefined humor and laugh-out-loud unexpectedness.

A grown man vomit-feed a young bird in its nest, stick his head out of a rhinoceros' backside, or commit a wide variety of toilet humour-based atrocities in rapid-fire succession.

A little bit of Carrey goes a long, long way--and this Ace Ventura comedy goes on for too, too long.

Warner Bros. doubled the budget for this sequel in 1995. For their trouble, they got half as funny a film.

Painful to sit through.

'Why What a lovely Room of death'! I do enjoy this movie, i prefer it to the first one as its far more entertaining and funny! Its a typical JIm carrey role really and although theres not much about this movie that you can say is brilliant but if you just look for a silly stupid Jim carrey movie that will lighten your rainy afternoon then this is the movie to watch!

Even funnier than the first film. In this one we see Carrey do a lot more of his trademark physical comedy. A lot of critics didn't like this movie, but it is rightfully considered one of the movies they got wrong. It's too bad that the straight to video 2nd sequel about his "son" who is a "Jr. Pet Detective" actually exists. What's worst of all though is that his son in the 3rd film mentions his dad got lost in the bermuda triangle in this film. Ace you'll be missed forever.

First of all, Ace Ventura was a big hit in the 90s, so they made this sequel to capitalize on the success, but it didn't really need a sequel. This one just took the original ideas and made them less funny. Overall, there are only a few funny scenes, so I'll say it's just so-so.