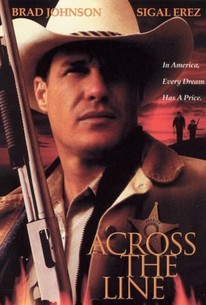 Across the Line Photos

Educated and with a promising career, Miranda (Sigal Erez) finds her life in Mexico shattered by corrupt officials, causing her to take flight across the Rio Grande into Texas with other illegal immigrants. With no possessions or money, Miranda finds herself in the desert separated from her protective brothers. The opportunity arises to hide in the Winnebago of a pair of American tourists, but the tourists are witness to a horrific crime: A drug deal has gone wrong and a half-dozen mobsters are slaughtered by corrupt U.S. Border Guard patrolmen. With a policy of not permitting any witnesses to escape, the renegade patrolmen then kill the tourists at point blank and with the hidden Miranda as a witness. Eventually Miranda finds a job as a waitress in a diner where she befriends the local sheriff, Grant (Brad Johnson); when Grant learns what Miranda has seen, he becomes his key witness' protector -- and, eventually, her lover -- as the ruthless patrolmen close in for the kill. What Grant doesn't know is that the leader of the murderous cops is closer to him than he thinks.

Critic Reviews for Across the Line

There are no critic reviews yet for Across the Line. Keep checking Rotten Tomatoes for updates!

Audience Reviews for Across the Line

There are no featured audience reviews yet. Click the link below to see what others say about Across the Line!

Across the Line Quotes