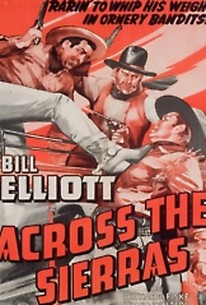 The taciturn William Elliott stars in this above-average entry in Columbia's "Wild Bill Hickock" B-Western series. Returning to town with Larry Armstrong (Richard Fiske), an old friend he has just saved from a lynch mob, Hickock learns that Mitch Carew (Dick Curtis), a prison parolee, has killed Dan Woodworth (John Dilson), and is now attempting to buy Woodworth's store as a front for his nefarious schemes. Larry, who is embittered about the low wages being paid by the area's ranchers, opts to join Carew's gang of thugs. Wild Bill, meanwhile, is courting Woodworth's Eastern-bred niece Ann (Luana Walters), but the girl scoffs at his old-fashioned western ways. Alarmed that Larry has been involved in a stage robbery, Bill arranges to meet his old friend. Their rendezvous turns hostile and as Wild Bill is about to leave, Stringer (Leroy Mason), one of Mitch's stooges, takes a shot at him. Returning fire, Bill accidentally shoots and kills Larry. Blaming himself for the death of his friend, Bill vows to bring Mitch to justice. But when Ann once again denounces her suitor's western code of ethics, Bill offers to give up his guns and become "a peaceful man." When he learns that Mitch is waiting for him, our hero straps on his guns once again and goes to meet his destiny. A shootout in the street finally ends Mitch's reign of terror. Realizing that he will never be able to forsake the code of the west, Bill bids Ann a fond farewell and leaves town. ~ Hans J. Wollstein, Rovi

Eddie Laughton
as Man with Noose

Jim Pierce
as Wilson
View All

Critic Reviews for Across the Sierras

There are no critic reviews yet for Across the Sierras. Keep checking Rotten Tomatoes for updates!

There are no featured reviews for Across the Sierras at this time.

Across the Sierras Quotes